Read Section News every month to see what types of programs and activities ASNT Sections have held recently, or to catch up on what your Section has been doing. These postings will also be published in Materials Evaluation.

On 12 March, the Beijing Section participated in student/career outreach by giving a lecture titled “Introduction of ASNT and Training and Certification System” during an ultrasonic testing training course. There were 47 students in attendance. 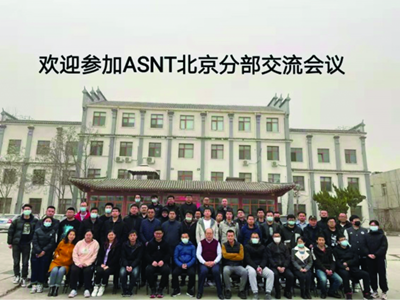 The Beijing Section participated in career outreach to 47 students, which included an introduction to ASNT, on 12 March.

The Chicago Section met virtually on 12 April with 18 guests and members in attendance. The guest speaker for the evening was Emilie Peloquin, director of global advanced product support at Olympus.

Peloquin’s presentation was titled “Advantages and Limitations of Using Total Focusing Method (TFM).” The discussion highlighted the differences between the full matrix capture (FMC) and the TFM techniques. The use of proper wave sets was stressed, and a number of slides demonstrated the need to understand the type of defect that the inspector is trying to detect to obtain adequate results. To improve the inspection technique, modeling was used to illustrate the types of defects that could be detected in certain areas of a weld zone. With the wrong selection of wave sets, the defect was totally missed. The ability to visualize the defects and wave propagation using modeling greatly enhanced the detectability and accuracy of the inspection. Many attendees indicated that this was one of the best explanations of the technique that they had ever heard.

Section Chair Charles (Chuck) P. Johnson of Karden Sales expressed appreciation to the speaker and to the attendees for their valuable questions at the conclusion of the presentation. 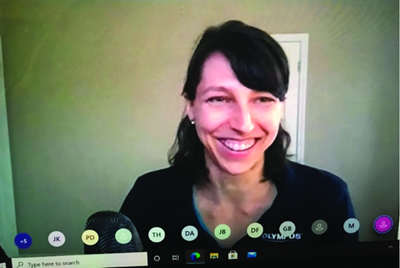 The Connecticut Yankee Section awarded Jherymel Montero Adille with the Section’s Scholarship Award for Excellence for his essay titled “Future and Effects of Nondestructive Testing Methods.” Adille was awarded the scholarship on 14 April.

Michael E. Gase, SCWI, ASNT NDT Level III, and corporate quality director at Midwest Steel Inc., spoke at the Detroit Section’s virtual 22 April meeting. There were 20 people in attendance. Midwest Steel is a national structural contractor that erects structural steel and precast elements nationwide. Gase has over three decades of experience in the structural steel and mechanical industry performing project management and quality assurance functions. Gase spoke on AISC’s (American Institute of Steel Construction) Specification 360 Chapter N and Provision 342 Chapter J (Quality Control/Quality Assurance). Information was presented and examples given on the requirements of each chapter section, how they are used, how they work together, and what should be known. 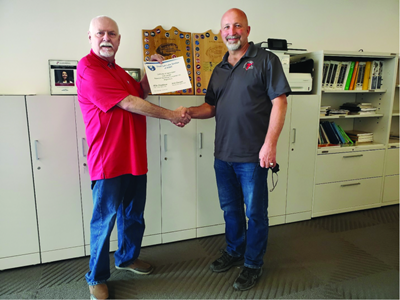 The Greater Houston Section met on 10 March at the Republic Grill at Battleground Golf Course in Deer Park, Texas. There were 40 in-person attendees. Section Chair Zachary (Zac) Wayne Sebren opened the meeting with several announcements, then individual introductions were shared around the room. 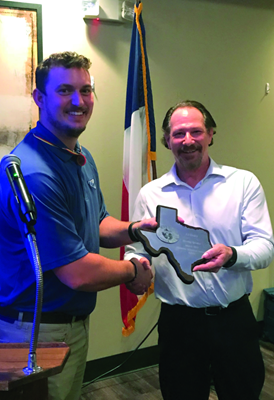 The Kuwait Section organized its ninth technical presentation of the program year (July 2020 to June 2021) on 9 February via an online platform. About 21 professionals attended the presentation, “The Importance of Automation in Ultrasonic Thickness Monitoring,” presented by Parthasarathi Sukumaran, senior mechanical integrity specialist at EQUATE Petrochemical Co. in Kuwait.

The technical presentation explained the importance of automation in ultrasonic thickness monitoring (UTM) in pressure vessels for high-temperature applications. The presentation also provided a refresher for the latest updates in NDT technology innovation. The Section appreciated the presenter for sharing valuable information on the basic requirements and applications. Attendees had an in-depth conversation about UTM implementation for high-temperature application in petrochemical refineries. 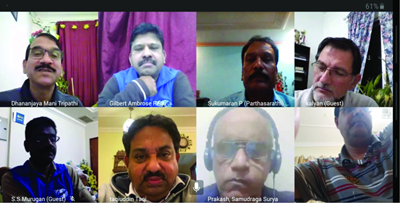 The Kuwait Section discussed the automation of ultrasonic thickness monitoring at its 9 February meeting.

On 30 March, the Lewis & Clark Section was pleased to have the prestigious Curt Powell give a digital presentation. Powell, who is a Section director, presented on “Changes to ASTM E-1417 and How This Impacts the NDT World.” He addressed the changes that will soon be published and how these changes will be received in the NDT industry. There are several updates that help clarify the interpretation of the procedure and help uniformly update the ever-changing world of NDT. The changes were positively viewed by the members, who asked many questions and discussed several scenarios. The Section looks forward to seeing these changes published.

The Miami Valley Section met on 3 March to hear a presentation on physical metallurgy and forming processes given by Thomas Fletcher of Element Materials Technology. The Section also met on 7 April to hear a presentation titled “Advances in Ultrasonics of Metallic Bonds” given by Alexander Leybovich. Fifteen members and guests joined the virtual meeting, and attendees received a very interesting presentation on lessons learned in ultrasonic metallic bond testing.

The North Atlantic Section held a virtual meeting on 16 April. The meeting was very well attended with 23 members plus guest speaker Tom Martin of JetSoft. Martin gave a presentation titled “How JetSoft Is Utilising NDE for Industry 4.0, a Worked Example.” The presentation was very informative and highlighted the way that companies are leveraging data much more than ever before, so having good data collection and management is more important than ever.

The Old Dominion Section held its seventh meeting of the program year on 22 March. It was conducted remotely via an online platform.

The technical part of the meeting included a presentation by Melvin (Mel) V. Fravel, Jr., director of operations and radiation safety officer at Concrete Imaging Inc. Fravel presented “Concrete Inspections Using Digital Radiography” in real time. The presentation was followed by a Q&A session. A total of 11 people attended the meeting, including members from New Hampshire. Section Chair Keith E. Erk led the business portion of the meeting.

The Rockford Stateline Section met virtually on 7 April with 12 members in attendance. Section Chair Joel A. Mohnacky of Collins Aerospace introduced the guest speaker Tyler Ripperger of Waygate Technologies. Ripperger is an application engineer at Waygate’s computed tomography (CT) laboratory in Cincinnati, Ohio. His talk for the evening was titled “High-Energy CT: The Need for More.” The discussion centered on several areas such as industry challenges, MeV CT as a solution, target applications, and the high-energy source. He highlighted several applications comparing a 450 kV versus a 9 MeV source. Some of the major differences are the reduction in scanning time and the acquisition of greater details and scatter control. Scans from several thick-section, highly detailed nickel alloy aerospace components were shown with improved imaging results. Ripperger stressed the need for RQIs (representative quality indicators as specified in ASTM E1817) as an important tool for proving the accuracy of high-energy CT scans. Finally, he discussed the equipment and shielding needs as well as detector size and resolution using both a DDA (digital detector array) and an LDA (linear diode array) along with scatter correction and applicable evaluation software. A lively Q&A session followed.

The Saudi Arabian Section held its tenth technical meeting for the program year (2020 to 2021). The meeting, held in partnership with Isotopes Arabia Co., was conducted via an online platform on 6 April and attended by 120 members and guests. Jake Bourn, vice president of global operations for QSA Global Inc., delivered a presentation on corrosion under insulation scanning solutions. A Q&A session led by Section Educational Director Hashem N. Al-Nasser and a raffle drawing followed the presentation. 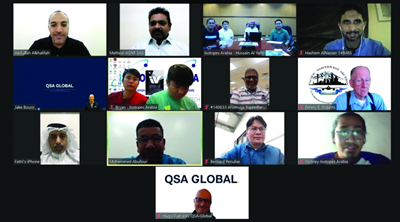 Attendees of the Saudi Arabian Section meeting listened to a presentation about corrosion under insulation on 6 April.

The Southern Africa Section held a very successful technical meeting via an online platform on 20 April. Jan-Albert Viljoen of Gammatec and Christian Smith of Interactive Aerial Inc. presented on “Zenith – Confined Space Inspection Camera System.” Regional Director, Region 18, Mark A. Ormrod was in attendance. The 18 attendees enjoyed a lively debate on all aspects of this new technology.

The Southwestern Ontario Section held an executive virtual meeting on 16 February with six members in attendance.

On 26 March, the Susquehanna Valley Section held a virtual “Lunch and Learn” hosted by the Pennsylvania State University attended by 26 individuals. The Section was graced by the presentations of two students performing research in the Penn State Ultrasonic Lab under the supervision of Parisa Shokouhi, Ph.D., associate professor of engineering science and mechanics.

Evan Bozek and Colin Williams are both seniors at Penn State enrolled in the Integrated Undergraduate-Graduate Program. During the course of their undergraduate studies, they have been performing research in the area of nonlinear ultrasonics.

Bozek began the meeting by presenting on nonlinear resonance ultrasonic spectroscopy (NRUS) for additive manufactured (AM) parts. His presentation demonstrated that it is a viable solution for AM part qualification by demonstrating the correlation between NRUS test parameters and fatigue life. Bozek further pointed out the need to move from a traditional coupled testing setup to an air-coupled approach using air-coupled excitation and laser for reception. This would reduce the measurement uncertainty.

Williams presented his work on nonlinear ultrasonic testing for predicting fracture toughness of steel samples during the second half of the meeting. He began by explaining the application and the justification for a need to develop such a test method. Williams’s work focused on relating bulk wave and surface wave nonlinearities to absorbed energies in order to ultimately predict fracture toughness. Williams highlighted a need for numerical modeling and additional materials characterization during future research he plans to conduct.

It is clear the future of nondestructive examination is in good hands after hearing the presentations from these two bright young professionals. The Section would like to further extend its gratitude to Bozek and Williams for their excellent presentations. 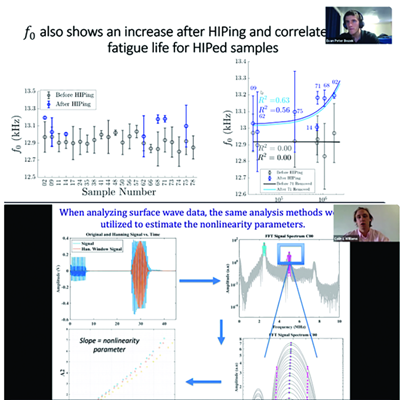 The United Arab Emirates Section held a virtual board meeting on 8 March 2021.

The Connecticut Yankee Section awarded Jherymel Montero Adille with the Section’s Scholarship Award for Excellence for his essay titled “Future and Effects of Nondestructive Testing Methods.” 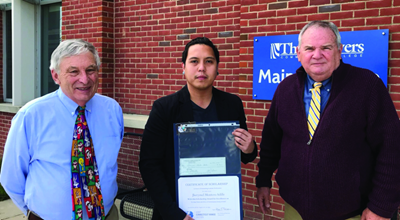