The Central Ohio Section held a meeting at ASNT Headquarters in Columbus, Ohio, on 18 April. There were 19 members, students, guests and vendors in attendance. Ray Behe gave a presentation on “The Inspection of Piping, Pressure Vessels and Welds using the Balanced Field Electromagnetic Technique (BFET),” a brief overview of BFET, which is used to inspect welds for cracking. After the presentation, Behe received a gift certificate from Section Secretary Peter Pan. The Section would like to thank Behe for this informative and interesting presentation. The vendors for the evening included Larry McDougal, from Testex, Inc. The Section would like to thank the vendors for their continued support.

A formal meeting of the Columbia River Section was held on 24 April at Applebee’s restaurant in Kennewick, Washington. Eleven members and two interested parties joined Region 16 Director Emery E. Roberts to discuss Section operations. Members consisted of the former chair, former treasurer and a former ASNT president. One of the interested parties committed to join ASNT and the Section. The Section thanks everyone for attending this important gathering.

Thirty-five members and guests attended the Connecticut Yankee Section 8 May meeting at the Groton Elks Lodge. In attendance were several engineering students and Professor Jim Sherrard, from Norwich, Connecticut’s Three Rivers College, as well as members from the Boston Section and Narragansett Bay Section and their guests. The speaker of the evening was Section Chair John P. Moran, quality manager for Doncasters New England. The schedule of events for the evening was the election of officers for the 2013–2014 year, awards, the financial report for the year, upcoming local events and a brief history of the investment casting process, followed by a presentation on the Doncasters investment castings New England plant in Groton, Connecticut. Prior to the presentation on the casting process, visiting college students, new Section members and members from the bordering sections were recognized. Patrick L. Shank was also recognized for his work in ASNT and being selected as an ASNT Fellow, Class of 2013. 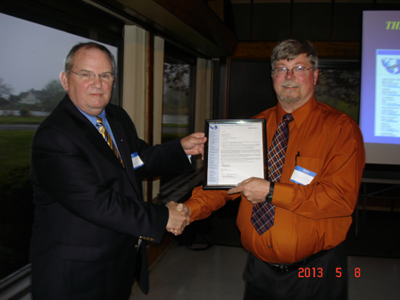 Announcements were made about the International Chemical and Petroleum Industry Inspection Technology Conference, held 12–15 June. Oden reminded everyone that there were still sponsorship opportunities available for the conference. For Family Day this year the Section reserved 100 tickets to the Houston Astros and Los Angeles Angels baseball game, which was 29 June.

This year, Oden began a new tradition for the annual transfer of Section leadership. He presented incoming Section Chair Jeff Wagner with a Lewis and Clark compass housed in an oak box. Inscribed on a brass plate on the top of the box were the words “Guide this Great Section Forward.” Oden said he hoped to see this symbolic gesture of the passing of leadership from outgoing chair to new chair continued each year.

Following the passing of the compass, Wagner presented Oden with a certificate from ASNT thanking him for serving as Section chair this year. Wagner also presented Oden with a Texas flag that was flown over the Texas State Capitol in his honor on the date of the Section’s 10 April meeting. This was a special completion-of-term gift from Wagner and the 2013 Section officers.

Following announcements, the three recipients of the Section’s Charles N. Sherlock Memorial Scholarship Awards: Lamont Beard (first place), Randy Snakenberg (second) and Tyler Smith (third), reviewed their winning PowerPoint presentations for the members. Requiring applicants to give a presentation was a new addition to the scholarship format for 2013. All three students did an outstanding job. The Section has awarded scholarships to more than 150 Texas nondestructive testing students..

The speaker for the evening was Curtis Dickinson, from the University of Ultrasonics, whose topic was the history, development and current applications of advanced ultrasonic testing (UT) techniques. Dickinson gave a very informative presentation of advanced UT techniques, including time of flight and phased array. An active question and answer session followed. 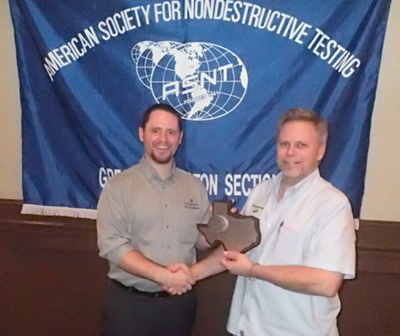 On 14 May, the Hampton Roads Section and Old Dominion Section met at Liebherr mining equipment for a plant tour. The Newport News, Virginia facility is Liebherr’s North America headquarters and is where the 363 t (400 ton) alternating current drive mining trucks are manufactured. Quality Manager Larry Stippich, of the Liebherr quality assurance/nondestructive testing department, provided a presentation and plant tour along with Stephanie Irvine, supplier quality engineer. The presentation was an introduction to the Liebherr Group, and the tour covered the fabrication and assembly lines of these giant trucks. There were 18 members and guests present for the tour. 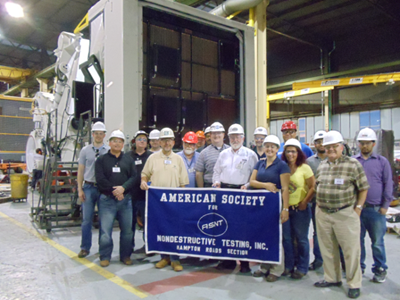 Members of the Hampton Roads Section joined the Old Dominion Section for a tour of Liebherr mining equipment.

The Kuwait Section held a meeting on 25 May, with eight attendees. The Section committee chair began by welcoming everyone and going over the proposed meeting agenda. Section Officer Farukh Nasim presented a technical talk on “Steel, Weld Metallurgy and NDT.” Nasim explained the importance and applications of nondestructive testing (NDT) in the oil and gas industry. The presentation was informative and interactive, with questions from Section members. Section Officer V. Vaidyanathan and M. Taqiuddin discussed various properties of steel and metallurgy. Section Officer S.S. Murugan and D.M. Tripathi further discussed various applications of NDT methods and techniques.

Section officers reminded everyone that ASNT NDT Level III examinations will be conducted 18–19 October. Participants have been confirmed. 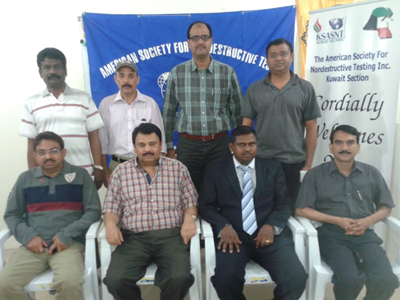 The North Atlantic Section celebrated 20 years with a conference and dinner. With 17 exhibitors, six speakers and 73 delegates, this event was a resounding success.

ASNT President Raymond Morasse gave a talk on the role of ASNT in the U.S. and the rest of the world, as well as membership and the nondestructive testing (NDT) community. Area Director Mark Ormrod gave a well-received address, titled “Stood on the Shoulders of Giants.” There were also talks on “Advances in Phased Array/Time of Flight Diffraction,” by Mark Nell, of Technology Design; “Training and Certification,” by Stephen Lavender, of Lavender International NDT Consultants; “The Introduction of Flexible Phased Array Transducers,” by Neil Hankinson, of Phoenix Inspection Systems, Ltd.; “Applications and Advances in Remote Visual Inspection,” by Paul Chapman; and “Nondestructive Testing in the Insurance Industry,” by Peter Cairns, of HSB Engineering Insurance. Everyone in attendance was impressed by the quality of speakers and range of topics and technical content.

Awards were given to Kamil Słyk, of Polkom Badania, as the Section’s Trainee of the Year, and to Jordan Wood, of Argyll Ruane, Ltd., for Technician of the Year. Philip Ford was presented with a Lifetime Achievement Award in recognition of all his work in NDT and support of the Section.

The Section Chair wishes to thank Phil Kolbe and his team for venue and booking organization, as well as Steve Marsh for awards, Peter Cairns for speakers, and Stede Marsh, Dave Griffin, Mark Jenkinson and Bryan Ravenshear for general organization. Finally, the Section Chair thanks the Section members for their support. 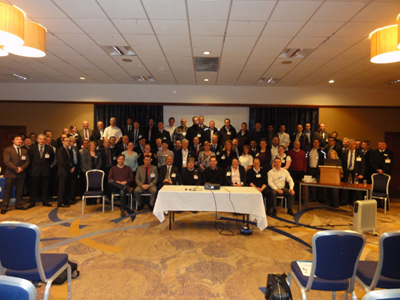 The North Atlantic Section celebrated its 20th anniversary with a series of technical presentations and dinner.

Following the tour, the Section traveled to Chuck Tanner’s Restaurant, located in New Castle, where all enjoyed the food and good conversation.

The Saudi Arabian Section held its 11th technical dinner meeting for fiscal year 2012–2013 on 6 May at the Dhahran Palace Hotel, Dhahran, Saudi Arabia. The Section-sponsored meeting was attended by 108 members and guests.

Section Board Chair Mohammad A. Al Salih inaugurated the meeting and started with a warm welcome to everyone. He made announcements, including a reminder about Level III examinations taking place on 26–27 October. He also mentioned that the Section calendar for 2013–2014 was being prepared and that all nondestructive testing companies are invited to participate to support the Section.

After announcements, Al Salih invited Region 19 Director Marwan Basrawi to discuss the state of local Section officers and board members, whose tenures were being extended for one year based on a few officer withdrawals and a lack of qualified candidates.

After the presentation, a raffle was held as usual, with 13 winners awarded door prizes. After the prize distribution, members retired to a poolside dinner buffet served by the Carlton al Moaibed hotel, Al Khobar, Saudi Arabia. 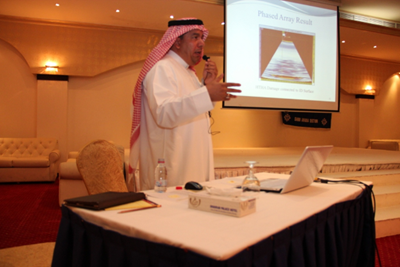 Saudi Arabian Section Chair Mohammad A. Abu Four delivered a technical presentation at the May meeting.

The Southern Africa Section held a meeting at the Willow Park Conference Center on 22 May. Outgoing Chair Ben Beetge gave a heartfelt speech of thanks to all of the committee members who had assisted him during his term. His speech mentioned that the focus of the Section had been on conducting ASNT NDT Level III examinations for the 2010–2011 year to help the Section build up some well-needed funds. The 2011–2012 year was mostly focused on the successful World Conference on Non-Destructive Testing that was held in Durban, South Africa in April 2012. The Section was very involved on many levels in the conference. Beetge informed all present that for the 2012–2013 year the aim will be to run the Section as correctly and efficiently as possible. He handed the role of Section chair over to Garth Appel, who will be overseeing all activities, goals and planning for the next year.

The committee was congratulated and wished well by all at the meeting. 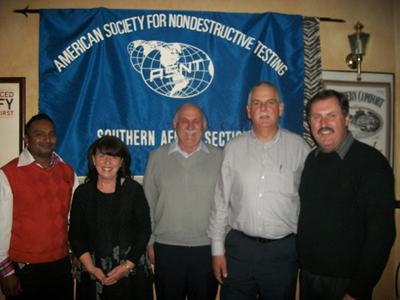 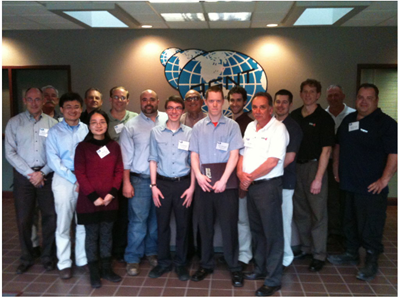 Members of the Central Ohio Section convened for a meeting and presentation at ASNT headquarters in Columbus, Ohio, in April.