The Kuwait Section held a meeting on 11 July at Winner’s Restaurant, in Kuwait, with 11 attendees. Section Chair Nayef Al-Enezi began by welcoming everyone and going over the proposed meeting agenda.

He first emphasized the need for quality training classes, commenting that such training would help the Section raise funds to continue its programs. Education Committee Member Sangali Gunasekaran told members that the training course materials, locations, tutors and fee structures need to be decided upon. He also explained that a minimum of 80 h needs to be maintained for Level I and Level II training courses. The purchase of a predefined ultrasonic testing block and radiographs was discussed and agreed upon in addition to the training materials. Gunasekaran had previously been assigned by the Section chair to develop a training manual for conducting Level I/II training, examination and certification of nondestructive testing (NDT) personnel in line with the 2011 edition of SNT-TC-1A.

The revised organization structure and photographs of Section officers were expected to be uploaded to the website by July. Auditing Committee Chair D.M. Tripathi announced that the Section website was updated with all the current information.

S.S. Murugan announced that the scheduled ASNT NDT Level III examinations would be conducted 18–19 October. An announcement had previously been made on the Section website and was getting a positive response from candidates. The last date to turn in an application form was 31 July. It was agreed that the arrangement of a refresher course was to be finalized based on the response from the members.

The Section chair instructed Program Committee Member Shabbir Ahmad to find an apartment for the Section, which was to be completed within a month of the meeting.

Al-Enezi went on to instruct Education Committee Member P. Sugumaran to coordinate with ASNT for the training of Level I and Level II NDT personnel and to support the program committee for certification within the year. The Section decided to organize a regional technical seminar in Kuwait, which Sugumaran agreed to coordinate. Abdul Salam and Shabbir Ahmad assured the support and increased involvement of I&CT, Kuwait Oil Company.

Al-Enezi and the rest of the members concluded by wishing a bright future to V. Vaidyanathan, former chair of the Section program committee, who left Kuwait in July to join PDO in Oman.

The OKC Section meeting on 23 July, which was attended by 13 members and three guests, was a success. The meeting was held at Crossroads Institute’s facility in south Oklahoma City, Oklahoma. The Section presented Walt Matulewicz with a certificate from ASNT and a plaque from the Section members in thanks for his year of service as Section chair. It was then decided that Matulewicz would stay on as chair for another year. Dean Ritchey and Richard Ridenour, from Magnaflux, gave a one-hour presentation regarding ultraviolet A light-emitting diode lamps used in magnetic particle testing and liquid penetrant testing, and the standards and challenges related to them. Prior to the adjournment of the meeting, Matulewicz presented Ritchey and Ridenour with plaques of appreciation for their attendance and presentation. 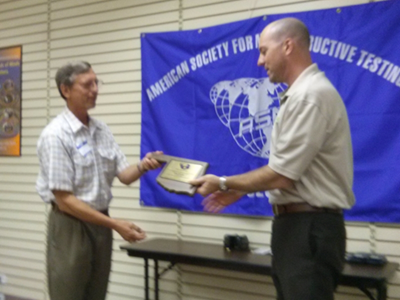 The Saudi Arabian Section held its first technical dinner meeting for the fiscal year 2013–2014 on 7 July at the Carlton al Moaibed Hotel in Al Khobar, Saudi Arabia. The meeting was attended by 92 members and guests and was sponsored by the Section.

Section Chair Mohammad A. Abu Four started the meeting with a welcome to everyone. He also made announcements, which included a reminder about the Section Level III exams on 26–27 October. Application submissions were due in August. He also announced plans for upcoming short courses on “Projector Maintenance” and “Emergency Source Retrieval.” Pre-booking ended in September.

After announcements, Abu Four invited the guest speaker, Ahmed Sharief, general manager of ITIS, to start his presentation regarding the “Utilization of Digital Radiography.”

Following the presentation there was a prize distribution, and then members enjoyed a buffet dinner served by the Carlton al Moaibed. 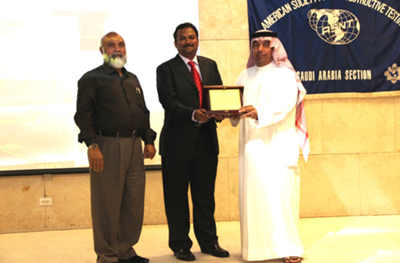 The main topics discussed by the Kuwait Section during its July meeting were: updating the organization structure and Section committee members; updating the Section website; training classes for Level I and Level II; a third technical presentation; and ASNT NDT Level III exams for the current program year. 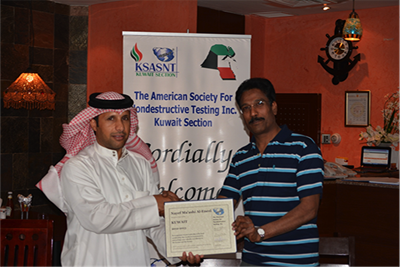