The Arizona Section held its first meeting of the 2014–2015 year on 17 July at the Rodehouse restaurant in Phoenix, Arizona. The speaker was Michael Urwin, from Test Equipment Distributors, LLC. His presentation, titled “GE Mentor Visual iQ Video Probe,” was given to 25 members and guests. 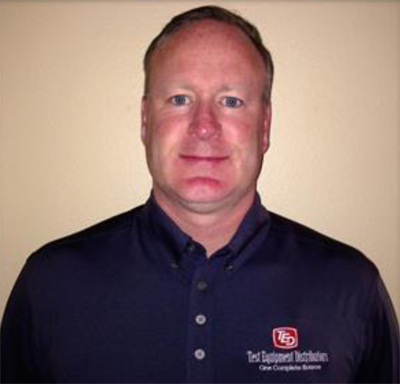 The Central Ohio Section held a meeting at the DNV GL facility in Columbus, Ohio on 19 August. There were eight members, guests and vendors in attendance. James T. Worman gave a presentation on “ASME Section V Nondestructive Examination.” Worman joined the National Board of Boiler and Pressure Vessel Inspectors in 2010. He has over 20 years’ experience in the welding, design and inspection of pressure vessels. He has been trained as an ASNT NDT Level II in liquid penetrant, magnetic particle and ultrasonic testing methods.

Worman presented a summary of ASME Boiler & Pressure Code Section V Nondestructive Examination and explained the certification process and procedure. After the presentation, Worman received a gift certificate from Section Chair Brian Frye. The Section would like to thank Worman for this knowledgeable and interesting presentation. The vendor for the evening was DNV GL, whom the Section would like to thank for its continued support. 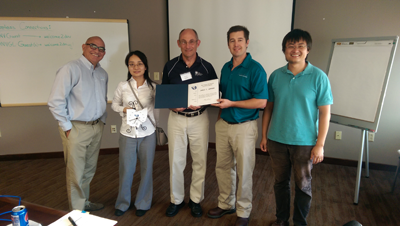 Members of the Central Ohio Section met at DNV GL in August.

The Cleveland Section held its 38th annual golf outing on 22 August at the Coppertop at Cherokee Hills Golf Course, in Valley City, Ohio. Fifty-eight total golfers played the course. Winners of the event were the team from Chemetall US, Inc., which consisted of Roche Faucheux, Kevin Rogers, Craig Yuvan and Steve Pflanz.

The highlights included the blind bogey winning team, which was TED #2; reverse raffle winners from Spitzer Motor City, Acuren Group, Inc. and Mistras, Group, Inc.; and the 50/50 winner of $270, Connie Zimmerman, from Bearings and Transmission Supply. As a special mention, Test Equipment Distributors, LLC (TED) donated $500 to the Wounded Warrior Project in lieu of buying gifts.

Everyone had fun and enjoyed the food. Big thanks go to Section Golf Chair Tony Sansavera, of TED, for another successful outing, and to Clarence Wyland, of TED, for his photography skills.

The 2014 Pacific Northwest Section golf scramble and banquet event was held on 16 August to raise funds for the Section’s nondestructive testing (NDT) student scholarship program. The event was a resounding success. Forty-two golfers enjoyed a great day on a beautiful Pacific Northwest golf course at Hawks Prairie in Lacy, Washington. A hearty barbecue and raffle ended the day.

On behalf of the Section board of directors, thanks to all of the players who participated and thereby contributed to the cause of providing NDT education through the Section’s student scholarship program.

Furthermore, thanks to the generous sponsors who contributed towards making this a fantastic event. Special thanks go out to the platinum sponsor, MPM Products, Inc., for making it possible for the Clover Park student team to play for free.

Thanks also to the event organizing committee: Flynn Spears, Kathy Ferguson, Trey Gordon and Emery Roberts, for contributing so much of their time and energy towards making sure that this event went smoothly and that everyone had a good time. Special thanks go out to Kathy Ferguson and her daughter Erica Ferguson, who sold mulligans and raffle tickets, ran the putting contest, and worked with the course staff to set up the banquet. Finally, thanks to Roberts, who once again did a fine job as the official course photographer and all around general support.

The Saudi Arabian Section held its second dinner meeting for the 2014–2015 program year on 11 August at the Carlton al Moaibed Hotel in Al Khobar, Saudi Arabia. The Section-sponsored meeting was attended by 125 members and guests.

Section Chair Fathi E. Al Qadeeb inaugurated the meeting with a welcome and announcements. He reminded everyone of the Level III exams that were held in October, as well as a short course on radiographic testing film interpretation, which was held 16 August at the Dhahran Palace Hotel.

After the announcements, Al Qadeeb invited Jonathan Burns, senior application specialist from Mistras Group, to start his presentation on “Advanced Applications for AE Technologies.” After the presentation, there was a period for questions and answers, and the guest speaker was given a plaque in appreciation.

Afterward, everyone retired to a buffet dinner specially prepared by the Carlton al Moaibed Hotel. 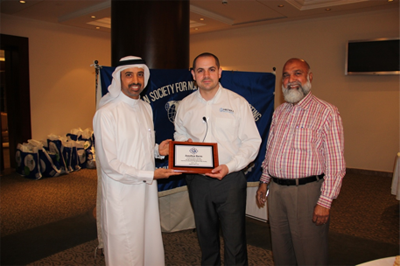 Three board members (chair, vice chair and secretary) from the St. Louis Section gathered on 12 August at Syberg’s restaurant in Maryland Heights, Missouri to discuss and plan for the 2014–2015 year. The vice chair of the Central Ohio Section, Peter Pan, also joined the meeting and shared some of his section experiences on yearly planning, as well as membership growth and retention. Items that were discussed in the board meeting included the 2014–2015 advance program, President’s Award program and points, how to increase participation, membership growth, how to increase student participation, joint programs with other societies such as the American Society of Mechanical Engineers and Institute of Electrical and Electronics Engineers, and student scholarships.

The Pacific Northwest Section met in August for a golf scramble and barbecue banquet. The weather was perfect, and the event concluded with a raffle and prize giveaway. 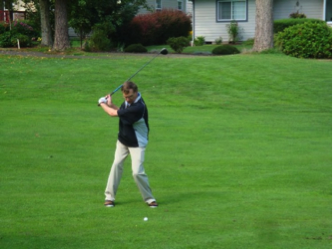 Dick Bossi on the fairway at the Pacific Northwest Section golf outing.