Van Velsor presented electromagnetic acoustic transducers (EMATs) and pulsed eddy current (PEC) that Structural Integrity uses for pipe inspection. EMAT is used to induce eddy currents that produce ultrasonic waves in conductive materials. This is a noncontact sound generation that can test tens to hundreds of feet of pipe. 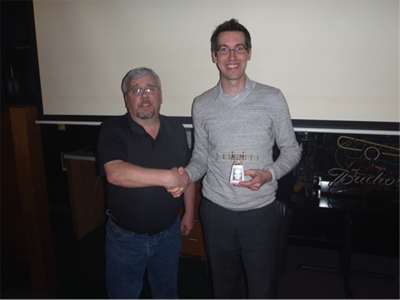 On 10 February, 13 members and guests were treated to a tour of the Portland Air National Guard nondestructive testing laboratory, a section of the 142nd Fighter Wing. Master Sergeant Joshua Walton guided the group through the scheduled testing, ranging from airframe inspections utilizing eddy current and computed radiography, to spectroanalysis of the jet engine oil, which is used as a predictor of upcoming maintenance needs. Walton discussed a rigorous tool control system that prevents the technicians’ equipment from being left inside or onboard an aircraft, which could lead to disastrous results. He proudly discussed a new lead-shielded radiography trailer that drastically reduces personnel exposure during radiography operations. It is considered the best of the best. Walton and his crew treated the group to an F100-200 engine run-up, including several cycles of augmented power (afterburner).

After the tour, Section Co-chairs Kristine Solarez and David Harris presented Walton with a certificate of appreciation and a small gift as a token of thanks for his efforts putting the tour together.

On 3 February, the San Diego Section hosted its sixth technical meeting of the 2014–2015 year at Seven Seas hotel in San Diego, California. There were 10 members and guests in attendance.

The speaker for the meeting was Ricky Morgan, who spoke on the “Las Vegas High Roller: Concept to Completion—The World’s Largest Ferris Wheel.” Actually calling it a ferris wheel is a misnomer. This is an observation wheel, 167.6 m (550 ft) tall at its apex, with 28 cabins, each transporting 40 people per 30-min revolution.

The fabrication, erection, and operation of the observation wheel took place on three continents and in at least six different countries. The design, logistics, and quality requirements were paramount to the success of a project such as this. It required an owner, a design team, a general contractor, fabricators, and quality inspectors with the oversight of a jurisdiction like that of the Clark County, Nevada Department of Development Services – Building Division with the kind of knowledge required for these types of amusement rides and transportation systems. Morgan fielded several questions on fabrication and inspection from attendees.

Past Section Chair Larry Olsen presented Morgan with a certificate of appreciation and a gift for his presentation. The meeting closed with the evening raffle of prizes and a 50/50 cash raffle. All in attendance had a great time.

The Saudi Arabian Section held its eighth technical dinner meeting for the fiscal year 2014–2015 on 16 February at the Carlton al Moaibed Hotel in Al Khobar, Saudi Arabia. The Section-sponsored meeting was attended by 32 members and guests.

Section Chair Fathi E. Al Qadeeb inaugurated the meeting and welcomed everyone. He made announcements about the Saudi Arabian Level III Exam that took place in April, as well as the radiographic film interpretation short course that took place in March.

Al Qadeeb then introduced Section Board Chair Mohammad A. Abu Four and invited him to start his presentation on “Concept of NDT in New Technology.”

After the presentation, everyone enjoyed a buffet dinner prepared by the Carlton al Moaibed Hotel. 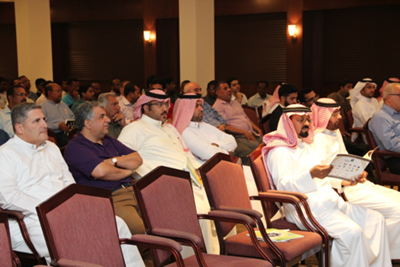 Tony O’Brian, from Avion/AvTask, demonstrated the application of infrared thermography on the composite helicopter rotor blade for moisture intrusion detection. Anish Poudel, from SIU Carbondale (SIUC), discussed real-world applications of the infrared technique. For example, the Space Shuttle Discovery’s reinforced carbon-carbon wings, composite laminates, and carbon-carbon brakes were used for aircraft applications. Philip Hopkins, from Team Industrial Services, demonstrated an application of eddy current testing on heat exchanger tubes to detect or measure cracks, discontinuities, corrosion, or heat damage in them. Michael Turner, from GE Measurement and Control, demonstrated the use of a portable Bluetooth eddy current testing unit to detect or measure cracks in the notch standard. Also, he demonstrated the use of GE’s XL-PMI X-ray fluorescence analyzers to identify alloy grade and chemistry.

Six members of the Section were present to provide hands-on NDT demonstrations. Fults and his colleague Evers gave a demonstration on shear wave UT and MT to test the integrity of welds in steel structures. They also explained on the use of longitudinal wave UT to measure thickness of the corroded steel structures.

Poudel explained the theory and applications of the infrared thermography technique to detect and characterize discontinuities in composite structures. In addition to learning about NDT techniques, high school students enjoyed the chance to take an infrared picture. Section members also talked about how students can consider a career in NDT and possible future opportunities in this field. The Section's participation was sponsored and coordinated by Tsuchin Philip Chu, a Section board member, SIU professor in the department of mechanical engineering and energy processes, and advisor of the SIU NDE club. 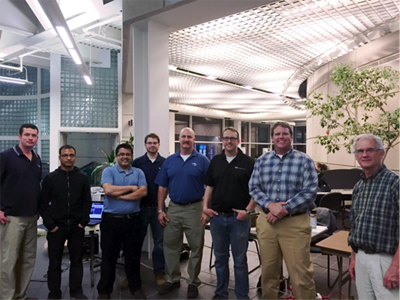 The Lewis & Clark Section wants to express its appreciation to the members of the uniformed services for their service to the country. Members and guests took a facility tour of the Portland Air National Guard nondestructive testing laboratory in February. 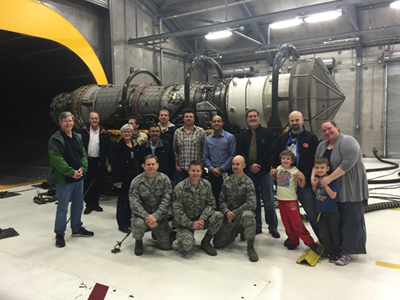 Members and guests of the Lewis & Clark Section posed in front of the test engine during their facility tour.