The Acadiana Section held a technical session meeting on 19 May at the Ramada Inn, in Lafayette, Louisiana. Gabe Hollier called the meeting to order, recognizing the Section sponsors and thanking them for their support. Section officers and board members were introduced: Damian Shaheen, Gabe Hollier, Richard Bordelon, Stephone Elam, Daniel LaCombe, Brandon Duvall, Sidney Gassen, Tim Borel, and John Forbis.

Stephone Elam presented an overview of the Section website. Details of business card sponsorships and other levels of sponsorship were explained to the attendees.

Richard Bordelon spoke on the Forging Links membership campaign, wherein ASNT and its members are strengthened by stronger links. Participation was encouraged, and recruiters and lead generators will be recognized in this initiative after 31 October.

Drawings were held for various door prizes and a 50/50 raffle. Door prizes included coolers and hats. Students had a special drawing for $25 cash and hats.

Forty-one members and guests attended the Connecticut Yankee Section’s 20 May meeting at the Groton Elks Lodge. The guest speaker was Lisel Rehn Athanasiadis, managing director at Labino AB, located in Domsjo, Sweden. Guests for the evening included professors and engineering students from Three Rivers College in Norwich, Connecticut, fellow ASNT members from the Connecticut Valley, Boston, and Narragansett Bay sections, and visiting nondestructive testing engineers from Pratt & Whitney. The audience was given the opportunity to try Labino’s products and witnessed the ease of handling, light weight, and intensity provided by these light-emitting diode lamps. The group also learned of Labino’s expertise in the ultraviolet (UV) industry. The group was given a brief history of the company and its advances in UV technology. Athanasiadis answered questions from the audience and discussed some of the more recent demands from the industry. Labino’s success has been the result of its product development and collaboration with distributors and continuous feedback from the end users. Its goal is to innovate new solutions, launch premium products, and commit to excellent service while listening to customers’ needs. Athanasiadis was presented a Mystic Seaport deck prism (a reproduction from the Charles Morgan) for providing this informative lecture. 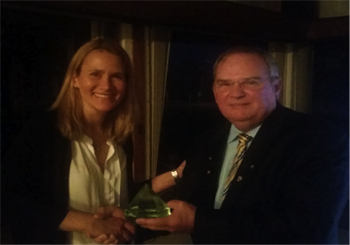 The focus of this first meeting was on the unveiling of the official German Section charter. Section Chair Markus F. Hagen proudly presented the certificate to all members and participants. In that moment, the determined and successful work of the last year was rewarded. After lunch, the Section participated in a guided tour through the Dillinger Hütte smelting works. There was sufficient time during the tour for inspiring conversations and networking.

The Greater Houston Section and ASNT hosted the 14th International Chemical and Petroleum Industry Inspection Technology Conference at the South Shore Harbour Resort in League City, Texas on 3–6 June. It was a great success in terms of venue, registrations, exhibits, and a barbeque dinner at the National Aeronautics and Space Administration Johnson Space Center Neutral Buoyancy Lab.

A highlight of the conference was the Section’s 50th Anniversary Party, with 102 members and guests poolside at the South Shore Harbour Resort on 5 June.  Special thanks go to host committee volunteers, conference sponsors, and the staff at the International Service Center for making this conference truly memorable. 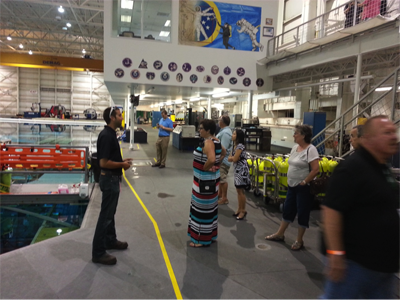 The Miami Valley Section met on 6 May to recognize its first Sam Robinson Memorial Award winner, Wesley Garten, from Xtek, Inc. The Sam Robinson Memorial Award, sponsored by Sherwin, Inc., was founded to honor Sam Robinson, a longtime member of the Section, by recognizing an individual who has demonstrated outstanding professional distinction and made a significant contribution to the advancement of magnetic particle testing/liquid penetrant testing (MT/PT). Garten received the award based on his MT of a large mill pinion, to determine whether the mill pinion could potentially be refurbished and sent back into operation. Garten was conducting this inspection as part of a service that Xtek offers to its customers, specifically the evaluation of used parts to determine if they need to be repaired or replaced. As part of the award celebration, Garten presented an excellent summary of his work and experiences in MT/PT at Xtek to the Section.

The OKC Section Vendor’s Night meeting on 18 June was at Crossroads Institute, 1613 SE 66th St., Oklahoma City, Oklahoma. There were six members and one guest who attended. Section Treasurer Walter Matulewicz presided over the casual meeting. Four sponsors, Tech Service Products, Inc., Carestream NDT, Magnaflux, and 3E NDT, LLC generously donated to the Section and were on hand with samples and product demonstrations.

On 13 June, 10 members and guests of the Old Dominion Section gathered at the Capital Ale House in Innsbrook, Virginia for a Section social event. All had a good time, as attendees sampled the many different beverages and meals available. Incoming Chair Doug McAvoy, Jr. (Virginia Department of Transportation state specifications engineer) gave a brief talk about what is in store for the upcoming program year, turning the social into a productive meeting.

Ten members of the Pacific Northwest Section gathered at the DoubleTree Suites by Hilton Hotel at Southcenter, Tukwila, Washington on the evening of 4 May to visit exhibit booths of various vendors. Exhibitors were on hand to answer questions about the new and exciting equipment on display. Most of the vendors had interactive exhibits. The vendors’ exhibits were part of the NDT of Composites topical, held 4–6 May. Clover Park Technical College was among the almost twice as many vendors exhibiting this year compared to two years ago. Cohosted with the ASNT International Service Center, 164 individuals attended the event, with 66 of those being ASNT members. Twenty-four attendees representing 11 countries (Brazil, Canada, Denmark, Germany, Japan, Netherlands, Norway, Singapore, Thailand, Turkey, and United Kingdom), in addition to those representing the United States, were in attendance. Following a welcome presentation by ASNT Executive Director Arny Bereson and keynote address by Larry Ilcewicz, chief scientific and technical advisor for advanced composite materials of the Federal Aviation Administration, attendees listened to 24 presentations on nondestructive testing (NDT) of composites. Included were radiography and ultrasonic techniques, proposed educational requirements, and advanced nondestructive testing techniques. The topical ended with an ultrasonic question that stumped all in attendance. 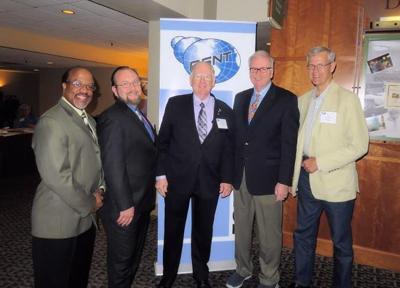 On 13 June, the San Diego Section hosted its 10th technical meeting of the 2014–2015 year at the 94th Aero Squadron, San Diego, California, with 12 members and guests in attendance. The evening began with a social hour and dinner. Section Chair Hans Weber welcomed all in attendance and presented a synopsis of the Section’s activities over the past year, which covered education, Section membership growth, financial stability, and items planned for the 2015–2016 year. Weber then presented the officers, directors, and committee chairs with a certificate of appreciation on behalf of the Section. Then, the most important item of the evening, the new board of directors was welcomed, and the gavel was passed to the incoming chair, John Morris. Morris provided comments and thanks for being elected. 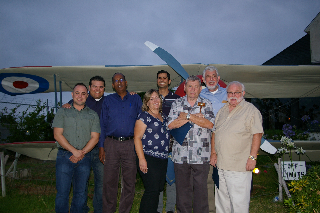 The Saudi Arabian Section held its 12th technical dinner meeting for the fiscal year 2014–2015 on 15 June at the Carlton al Moaibed Hotel in Al Khobar, Saudi Arabia. The Section-sponsored meeting was attended by 158 members and guests.

Section Chair Fathi E. Al Qadeeb gave the opening welcome and announcements, including an announcement that the Saudi Arabian Level III exams had been postponed until December.

He then briefly elaborated on the overview of Section activities that took place during the past fiscal year, including achieving Gold Level in the President’s Award Program for the seventh time in a row. Al Qadeeb also distributed the annual gifts to everyone as usual from the previous year.

After the presentation, attendees enjoyed a dinner specially prepared by the Carlton Al Moaibed Hotel. 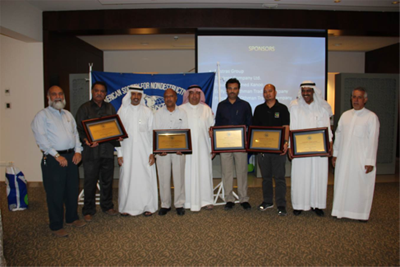 An appreciation token was awarded to the Saudi Arabian Section sponsoring companies during the fiscal year 2014–2015.

The Southern Africa Section celebrated its 20th anniversary on 21 May at the Birchwood Hotel in Boksburg, South Africa. More than 80 guests were treated to a banquet and live entertainment.

ASNT President L. Terry Clausing and his wife, Devon Clausing, were present at the banquet. All guests were honored to meet them.

Clausing awarded the Section with a commemorative plaque, which will be hung at the School of Applied Non-Destructive Examination, where all Section meetings are held. He also gave other gifts from ASNT to special attendees. 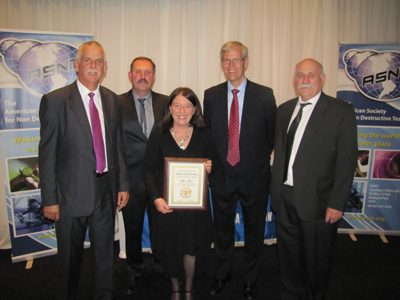 The Turk Section held a meeting on 29 May at Middle East Technical University, Ankara, Turkey. As part of the meeting, Regional Director Marwan Basrawi gave a speech about ASNT applications. 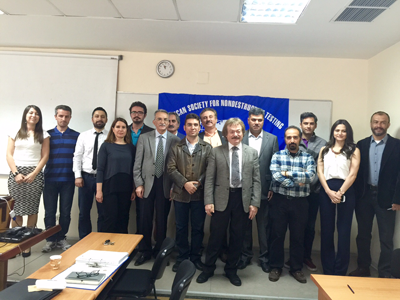 The Turk Section held a meeting in May.

The ASNT Board of Directors approved a new section charter on 31 October 2014 during its meeting at the 2014 ASNT Annual Conference in Charleston, South Carolina. The German Section is located in Cologne, Germany and is in Region 18. 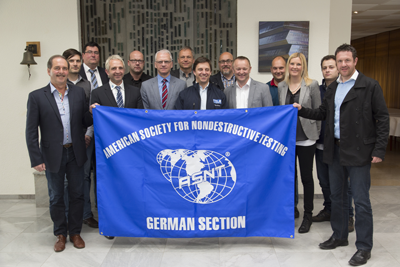 The first official meeting of the German Section in Dillingen, Germany was a great success.