Also in attendance was David Savoy, who updated the attendees about the success of the ASNT Annual Conference in Charleston, South Carolina.

The Arizona Section had a great showing for November’s meeting. Dave Ellingson provided a presentation on the Arizona Future City Competition, as well as the value of participating with the organization and mentoring youth in trades that will continue to develop and advance the U.S. and the world. Ellingson is a distribution engineer for Southwest Gas Corp.; he is currently in the New Business Projects group, working with developers and municipalities to provide safe and reliable gas service to all new developments. He has also worked as a franchise engineer handling relocations and was a planning engineer handling future growth analysis.

The Central Alabama Section (formerly known as the Birmingham Section) held its second technical meeting on 10 December at the University of Ultrasonics, Hoover, Alabama. Approximately 10 members and guests attended this event. The guest speaker was Daryle Higginbotham, the founder and chair of Marietta NDT, LLC. Marietta NDT specializes in the design and fabrication of custom X-ray and ultrasonic inspection machines for the aerospace, aviation, and automotive industries. Higginbotham gave a lecture on “Innovation on NDT Scanning Technology.” 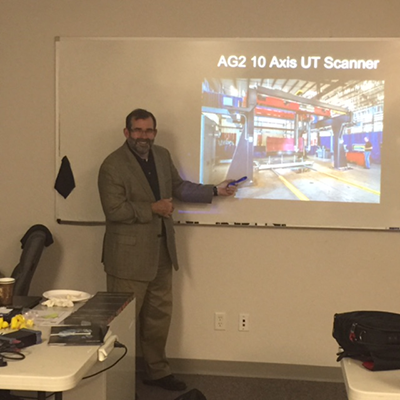 On 18 November, the Great Salt Lake Section met at the Joy Luck Restaurant. Twenty-four members and students were in attendance to listen to a presentation given by Jay Zimmerman, the western region sales manager of Carestream NDT. Zimmerman gave a PowerPoint presentation discussing statistics in computed radiography. The discussion centered on the fact that radiographic images are not the only information available but also the statistical information that can be gathered and assessed by the radiographer. The presentation was interesting and very informative. The Section greatly appreciates Zimmerman’s willingness to present at its meeting. 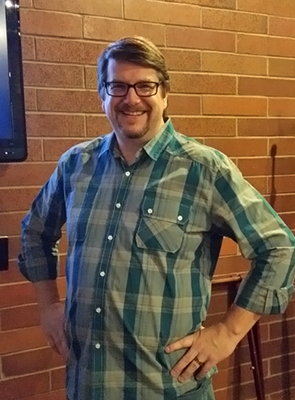 Jay Zimmerman, of Carestream, spoke to the Great Salt Lake Section in November.

On 18 November, the Mohawk Hudson Section planned to host Martin Derby, of Applus RTD. Heavy storms and snow closed the highway from Buffalo, New York and prevented Derby from attending. A speaker was arranged to discuss the history, strategy, and rules of the winter sport of curling.

The Mohawk Hudson Section met in November despite some inclement weather.

On 5 December, the Old Dominion Section held its holiday social meeting when 31 members and guests gathered at the Swift Creek Mill Theatre to enjoy dinner and the Christmas Play “Honky-Tonk Angels Holiday.” After the play, many went to the home of Joe Monroe and his wife Krystal Monroe for desserts and other refreshments. The Section looks forward to a productive and busy new year.

The Pacific Northwest Section’s November technical meeting of the 2014–2015 program year was held on 10 November. Twenty-six members and guests enjoyed the venue at the DoubleTree Suites by Hilton Hotel. Five students and two instructors attended from ASNT Corporate Partner Clover Park Vocational Technical College South Hill campus. Along with instructors Lise Musson and Charles Musson, the group gathered to listen to a presentation by 2014–2015 ASNT Chair of the Board Roger Engelbart. Engelbart presented a history, present status, and future plans of ASNT both domestically and globally in a presentation, titled “ASNT: Past, Present, Future.” His presentation started with congratulations to the Section for garnering its fourth consecutive Gold President’s Award; Emery E. Roberts, for being awarded the Charles N. Sherlock Meritorious Service Award; Jeff Siegel, for joining the 2014 class of Fellows; David Hall, for completing his first year on the ASNT Board of Directors; Flynn Spears, for beginning his first year on the same Board; and Trey Gordon, for co-chairing the very successful ASNT Annual conference in Charleston, South Carolina. From ASNT’s inception in 1941 as the American Industrial Radium and X-Ray Society to the successful launch of the Aerospace Handbook, edited by Pacific Northwest Section member Richard Bossi, to ASNT’s 75th Anniversary in 2016, Engelbart’s presentation was energetic and informative. At the conclusion of his presentation, Section Treasurer Gordon presented Engelbart with ASNT’s book of Relevant Discontinuities: Radiographic Testing.

The December meeting of the 2014–2015 program year was held on 13 December. This meeting consisted of two venues. First, 10 members and guests gathered at the Grill from Ipanema restaurant for rodizio. Rodizio is a popular Brazilian style of enjoying dinner among friends. A wide variety of different cuts of beef, lamb, pork, poultry, fish, and vegetables slowly roasted in specially designed charcoal grills that preserve all the natural flavors was offered. A discussion of the Clover Park Technical College nondestructive testing program and President’s Award Program summary was presented by the Section secretary.

After dinner, the group moved to the Elliot Bay Marina, where they boarded the Argosy Cruises vessel, Spirit of Seattle, for a night tour. Two members and their wives joined the group for the Christmas parade of boats adorned with lights. The group was periodically serenaded with Christmas carols by the Dickens Carolers as the vessel stopped at the Great Wheel on the Seattle waterfront and Winslow Beach on Bainbridge Island.

As a meeting attendance incentive, $30 is added to a fund at each meeting towards a year-end drawing of $240 from those who sign the guestbook at each meeting. 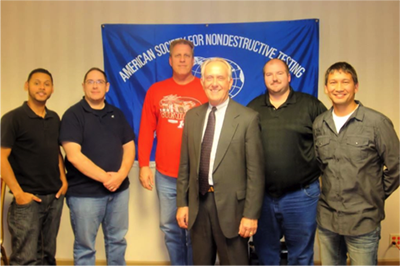 On 2 December, the San Diego Section hosted its fourth technical meeting of the 2014–2015 year. The meeting was held at the Best Western Seven Seas hotel, with 18 members and guests in attendance.

The speaker for the meeting was Marybeth Miceli, who spoke on “Emerging Technologies in the Bridge Testing Industry.” The presentation covered what has been coined as “parallel technology transfer,” which is bringing proven technologies from other industries into the bridge market for rapid commercialization. The discussion covered structural health monitoring and advanced nondestructive testing so that bridge owners obtain usable and actionable data to utilize in their asset management programs. Section Chair Hans Weber presented Miceli with a gift for her presentation.

In addition to the presentation of the evening, a state of the Section was presented by Weber and Treasurer Jerry McAnulty. The evening was also a spouses/significant others night. Each guest was given a gift by the Section, and there was a white elephant gift raffle/exchange for those who brought a gift.

The meeting closed with the evening raffle of prizes and 50/50 cash raffle. All in attendance had a great time.

The Saudi Arabian Section held its fifth technical dinner meeting for the fiscal year 2014–2015 on 10 November at the Carlton al Moaibed Hotel in Al Khobar, Saudi Arabia. The Section-sponsored meeting was attended by 156 members and guests.

Section Treasurer Mohammed A. Al Salih inaugurated the meeting and welcomed everyone. He made announcements, including about the Saudi Arabian Level III exam that will be held 18–19 April. There was a short course on radiographic testing film interpretation in January at the Dhahran Palace Hotel.

Al Salih then introduced the guest speaker, James Tomlinson, from Tracerco, and invited him to start his presentation on “New Tracerco Developments in Radiation Monitoring in Collaboration with Saudi Pioneers for Specialized Services.”

After the presentation, attendees enjoyed a buffet dinner specially prepared by the Carlton Al Moaibed Hotel.

The Section held its sixth technical dinner meeting for the fiscal year 2014–2015 on 1 December at the Carlton al Moaibed Hotel in Al Khobar, Saudi Arabia. The Section-sponsored meeting was attended by 135 members and guests.

After the presentation, everyone enjoyed a buffet dinner by the Carlton Al Moaibed Hotel. 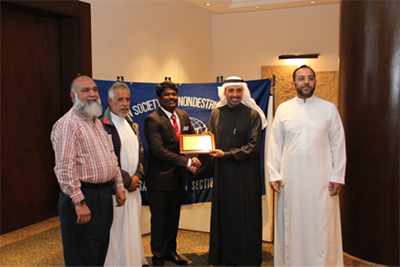 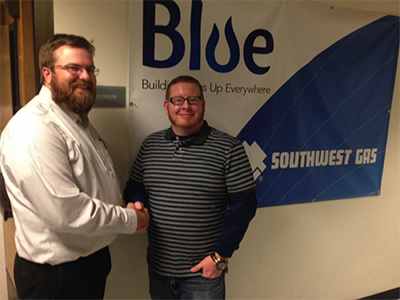