Lunch was catered by Jim ‘N Nick’s BBQ. Upon completion, each participant was eligible to receive 0.5 continuing education units from ASNT. 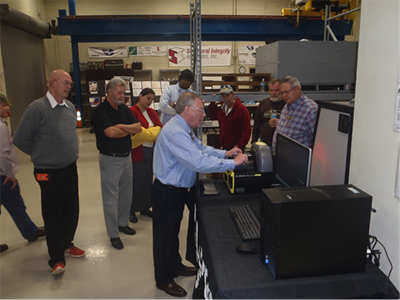 The Chicago Section met on 12 January, with 18 guests and members in attendance at Mack’s Golden Pheasant restaurant in Elmhurst, Illinois. The speaker for the evening was ASNT President L. Terry Clausing. Clausing discussed the latest developments in the production of ASNT standards and the use of SNT-TC-1A in industry. Clausing indicated that some sectors of industry are trying to develop their own personnel qualification document, based on job task analysis and third-party using International Organization for Standardization standards, instead of using the SNT-TC-1A format. He also reviewed the selection process for the hiring of the new executive director. Clausing elaborated on selecting Arny Bereson for that position and highlighted his background and qualifications. He also highlighted the means of communication that is to be used by ASNT leaders: “Listen, Observe, and Lead.” Clausing challenged all members to get involved and improve the Society through participation at both the local and national level.

Clausing then switched gears and gave a very interesting presentation on infrared and thermal testing, his particular area of expertise. The demonstration employed an infrared camera connected to the projection system so the entire audience could be involved. A number of different materials and objects were scanned and produced interesting images. Clausing was able to address all the different problems associated with the obtained images and highlighted all the modes of heat transfer, such as emission, transmission, reflection, and so on. The major emphasis made was that every product or situation has different requirements, and selection of the proper camera is very important, as are appropriate training and understanding of heat transfer. 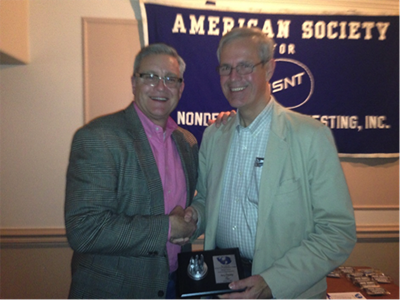 Thirty members and guests attended the Connecticut Yankee Section’s 14 January meeting at the Groton Elks Lodge. Guests for the evening included professors and engineering students from Three Rivers College, Norwich, Connecticut, and fellow ASNT members from the Connecticut Valley, Boston, and Narragansett Bay sections. The speaker of the evening was Don Blanchette, who is with the educational service department of Mistras Group, Inc., located in Princeton Junction, New Jersey. Blanchette’s presentation was focused on the challenges that face the nondestructive testing (NDT) workforce and the industry. He stressed how NDT organizations and companies are striving to stay current with the needs of the marketplace and the need for an adaptable and flexible workforce. Blanchette challenged the group to develop programs that reflect these realities, identify gaps in the delivery systems, and most importantly, identify strategies to measure the effectiveness of these systems and integrate technology into a continuous learning process. Blanchette was presented a Mystic Seaport deck prism (a reproduction from the Charles Morgan) for providing this informative lecture. 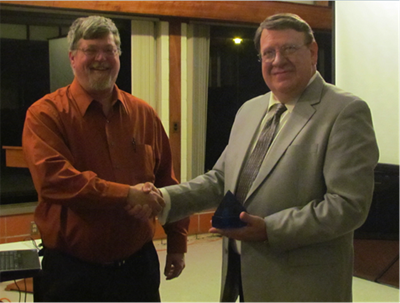 Seventeen Golden Gate Section members and guests were on hand 8 January to hear presenter Ed Green, a consultant with Arcadia Aerospace, as he shared information on a rapidly growing ultrasonic testing technique: acoustography. With the increased use of composites in aerospace structures, the need for faster ultrasonic inspection techniques is becoming apparent. The emerging technology of acoustography offers a potential solution. Acoustography differs from the current practice in that a super-high-resolution large area ultrasound detector (acousto-optic sensor) is used to produce a near instant, full-field, X-ray-like image of the test area. His talk featured the theory, instrument design, and many benefits of this new technology, including: full-field detection, near real-time acquisition, high lateral resolution, simple analysis, low-cost, and extremely high throughput. 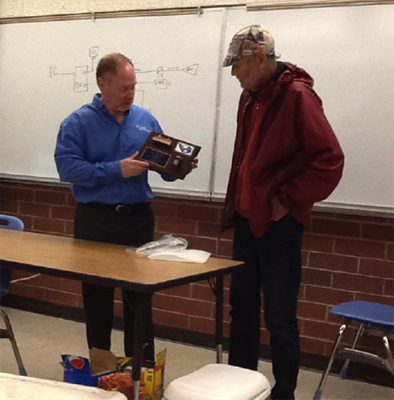 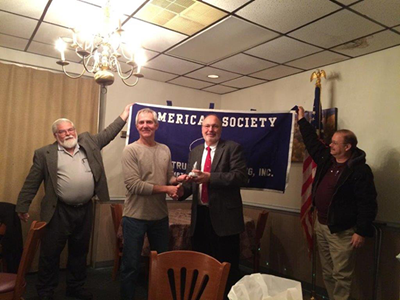 On 13 January, 12 members and three guests of the Lewis & Clark Section attended a presentation by Ajay Pasupuleti, of NanoArk Corp., describing the opportunities for digitizing radiographs for long-term storage, thus eliminating the demand for warehouse space and providing the benefit of an immediate silver harvest. The presentation was followed by several questions about the possible applications into the various members’ businesses. Test Equipment Distributors, LLC sponsored the dinner at Flying Pie Pizzeria, which everyone in attendance enjoyed. 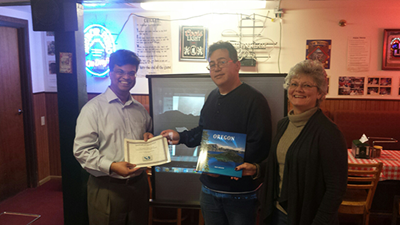 Guest speaker Ajay Pasupuleti (left) received a certificate of appreciation and token gift of a book on Oregon’s beauties from David Harris and Kristine Solarez, co-chairs of the Lewis & Clark Section.

On 17 December, the Mohawk Hudson Section hosted Thomas Batzinger, the engineering manager of inspection for GE Power and Water. Batzinger gave a fascinating overview of technologies used in gas turbine inspection and the challenges facing engineers and technicians.

Members of the Mohawk Hudson Section met in December for a technical presentation on gas turbine inspection.

Nineteen members and one guest attended the 15 January meeting of the OKC Section, held at the Crossroads Institute, Oklahoma City, Oklahoma. Prior to the meeting, attendees enjoyed a light dinner from Chick-Fil-A.

OKC Section Chair Mark Stowers presided over the meeting and introduced the speaker, Flynn Spears, who is in strategic sales at Laser Technology, Inc. based in Norristown, Pennsylvania. Spears’s presentation was titled “Laser Shearography of Aerospace Structures and Components.” After the very informative and interesting presentation, he demonstrated the use of a shearography system that featured a built-in laser, image processing computer, and remote control console. Spears has more than 30 years of experience in nondestructive testing and is also involved with ASNT on the national level as a past and current Board member, ASNT Fellow, member of the Aerospace and Laser Methods committee, and chair of the Exhibitors Committee. 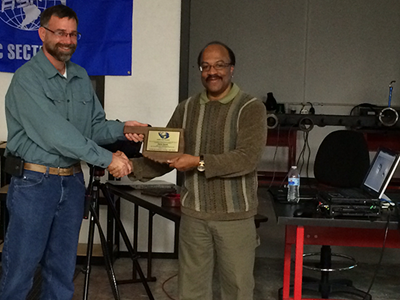 OKC Section Chair Mark Stowers (left) presented Flynn Spears with a plaque of appreciation for speaking at the January meeting.

The Old Dominion Section held a technical meeting on 26 January at the Italian Kitchen in Mechanicsville, Virginia. The meeting was attended by 18 members and guests, who gathered to watch a presentation given by Bruce Abernathy, assistant chief of structural materials for the Maryland State Highway Administration, on emergency field repairs of damaged bridges. Guests of the Section included several representatives from the Virginia Department of Transportation (VDOT) Bridge Division and VDOT Richmond District who have an interest in training employees to use nondestructive testing for earlier detection of problems in structures. Deonna Woolard requested engineers to help guide students of hers at Randolph Macon College through their senior year capstone project, and Regional Director William F. Via, Jr. reported on national and regional events. Overall, it was a successful meeting.

On 12 January, 20 members of the Pacific Northwest Section gathered for the first technical meeting of the new year. Dinner and meeting space was served by the Northwest Landing restaurant. This is the same venue as the upcoming NDT of Composites II topical on 4–6 May. Dinner was enjoyed by members prior to the guest speakers’ presentation. Chuck Musson and his wife Lise Musson, from Clover Park Technical College (CPTC), were the guest speakers and spoke on the materials science program, which includes nondestructive testing. They provided an overview of the program revitalization and development by local businesses with the involvement of the Section. 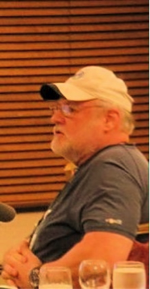 The January meeting of the Piedmont Section welcomed Liz Sohl for her presentation on “NDT Methods in the Tire Industry.” 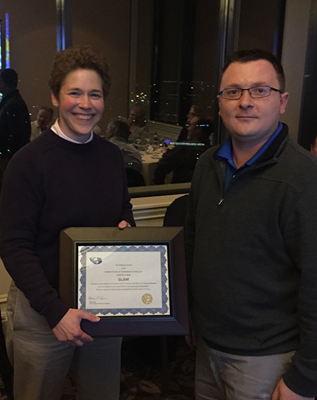 The San Diego Section hosted its fifth technical meeting of the 2014–2015 year on 6 January at the Best Western Seven Seas hotel. There were 12 members and guests in attendance.

The speaker for the meeting was John Morris, and the title of his talk was “Inspection of Rocket Motors and Missile Warheads using XRF Spectral Analysis.” The presentation covered the specific use and application of portable X-ray fluorescence spectral analysis equipment for cadmium plating verification on rocket motors and missile warheads at the U.S. Naval Weapons Station in Fallbrook, California. Morris covered the principles, applications, and limitations of the equipment, which sparked a discussion. There were numerous questions on how inspections were performed on the weapons as well. Morris included in his talk how to use the portable device.

Section Chair Hans Weber presented Morris with a certificate of appreciation and gift for his presentation. The meeting closed with the evening raffle of prizes and 50/50 cash raffle. All in attendance had a great time.

The Saudi Arabian Section held its seventh technical dinner meeting for the fiscal year 2014–2015 on 12 January at the Carlton al Moaibed Hotel in Al Khobar, Saudi Arabia. The Section-sponsored meeting was attended by 35 members and guests.

After the presentation, attendees retired to have an excellent buffet dinner prepared by the Carlton al Moaibed, Hotel. 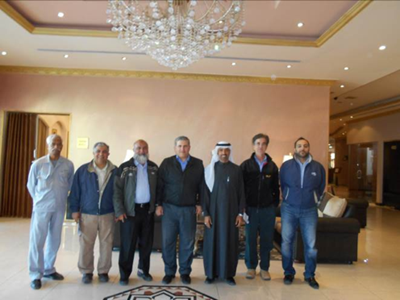 Saudi Arabian Section officers and board members were among those who met in January for a presentation by Section Chair Fathi E. Al Qadeeb (third from right).

The Southern Africa Section had its first meeting for 2015 on 14 January. Current committee members attended, as well as the past president and past vice president. This is a very special year for the Section, as it celebrates its 20th anniversary in May. There will be a black tie dinner with entertainment and a trip to the Kruger National Park for interested parties and overseas visitors. Guests from other ASNT sections worldwide are most welcome.

The St. Louis Section held its annual Spouse’s Night on 17 December. This event was held at The Old Spaghetti Factory at Laclede’s Landing in St. Louis, Missouri. Nine members and two spouses attended this event. Bhawana Uprety, a Ph.D. candidate in the Southern Illinois University School of Medicine, was the distinguished guest. She gave a great presentation about her native country, Nepal, the Land of Himalaya, which is sandwiched between two large nations—India and China.

Nepal measures approximately 800 km (497 miles) long, almost the size of the state of Iowa, and has approximately 27.8 million people. For a small landlocked country, Nepal has tremendous geographic diversity, including the world’s highest peak, 8848 m (29 029 ft), Mount Everest. Nepal covers approximately 0.3% of Asia and approximately 0.03% of the world. Nepal houses ten UNESCO world heritage sites, 8 of the 14 top peaks (above 8000 m [26 247 ft]) of the world, and is the birthplace of Buddha. Nepal was recommended as the “best value destination” to travel in 2013 by CNN Go, and BBC Holiday positioned Nepal as “one of the 50 places to see before you die.”

Uprety came to the U.S. in January for her education. She is married to Anish Poudel, acting Section secretary, and they have one-year-old son, Arwin. 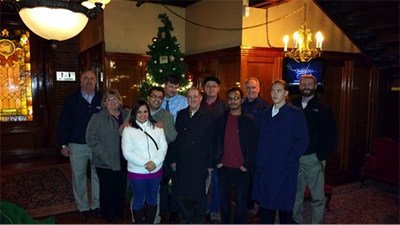 Members of the St. Louis Section met up for a Spouse’s Night in December.