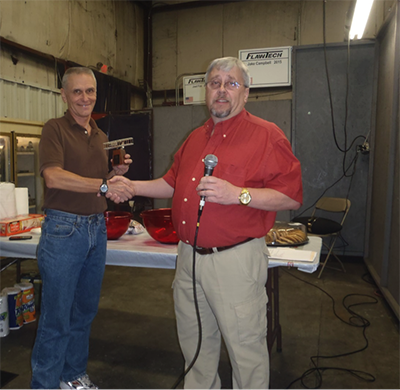 The Chicago Section met on 14 September with 14 guests and members in attendance at Mack’s Golden Pheasant Restaurant and Lounge in Elmhurst, Illinois. The guest speaker, Martin Anderson, from Global Technical Services, in Anchorage, Alaska discussed the theme “Auditing Nondestructive Testing Programs.” Anderson is an ASNT NDT Level III in six methods, a NACE Coating Inspector Program Level 3, and an American Welding Society Certified Welding Instructor and Certified Radiographic Interpreter. Anderson is also a member of several ASNT national committees. He has been chair for the Alaska Section for eight consecutive years.

In his presentation, Anderson highlighted the value of auditing the nondestructive testing program and cited numerous advantages, such as meeting regulations, ensuring inspector and company integrity, and avoiding fines, litigation, and a damaged reputation. Some of the key areas addressed were technician qualifications, such as training, experience, and examinations as well as visual acuity testing. Anderson reviewed a number of different instances where problems can occur and stressed the need for adequate documentation of all activities related to personnel certification. The talk stressed the need for constant self-audit rather than a week or two before the actual audit. This process helps to improve the overall quality of the organization and prevent audit findings. 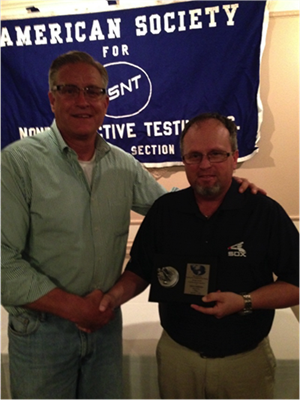 Forty members and guests attended the Connecticut Yankee Section’s 16 September meeting at the Groton Elks Lodge. The sponsor and speaker of the night was Robert Feole, of Feole Technologies, Inc., in Cranston, Rhode Island. Guests for the evening included several professors and engineering students from Three Rivers College in Norwich, Connecticut; fellow ASNT members from the Connecticut Valley, Boston, and Narragansett Bay sections; and Regional Director Larry Mullins. This was the first meeting of the year and a welcome back to all Section members with an invitation for student attendees to join. Of the 19 students and professors who attended, 14 joined that evening. Feole reported to the group the results of the Digital Imaging XVIII Conference that was held in July in Rhode Island, and he gave the audience an overview of what is happening at the ASNT International Service Center in Columbus, Ohio, as well as at some upcoming events. Nathan Carter joined the Section board that evening, replacing Beth Peterson. The Section bids farewell to Peterson; she will be missed, but a “welcome aboard” to Carter and the 14 new members was expressed. These new members bring new energy and the excitement of growth within the Society. 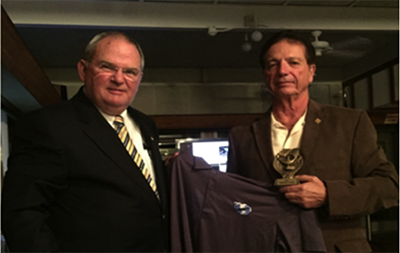 The Greater Houston Section’s 9 September meeting at Brady’s Landing restaurant hosted more than 113 members and guests, with an estimated 70% of those being nondestructive testing students. Special thanks go to the administrators at San Jacinto College and the Ocean Corp.

Prior to the evening’s presentation there was an executive committee meeting with 14 committee members in attendance. The meeting was called to order by Jeff Wagner, and special committee issues were addressed along with the approval of the prior meeting minutes and the treasury report.

This meeting was also a free T-shirt night, where door prizes included brunch for two at South Shore Harbour Resort and a photo album of Baseball Hall of Famer Craig Biggio’s last game with the Houston Astros signed by the Astros’ photographer Mike Hart. Announcements included reminders to register any qualifying technicians for the Jerry Fulin Technician of the Year Award. Skip Hoyt announced plans for the golf tournament at Timber Creek Golf Club. Seven special door prizes were given away to the attending membership: the Section donated five tickets, and Oceaneering International, Inc. donated two tickets. These tickets granted the lucky winners free admittance to the Section’s fall educational seminar held on 26 September at the San Jacinto College Central Campus. Wagner also presented an award to Tim Roach for being the Section’s Mentor of the Year.

Raymond Lindeen, of Houston Analytical Systems, introduced the September meeting speaker. John Charter, of Lixi, spoke on “High Temperature Sulfidation Corrosion Inspection.” Charter described his technique for using a radiometric profiler that uses radioactive energies to detect changes in material thickness as they pass through insulation and pipes and identify pipe wall loss (internal and external), corrosion under insulation, wet insulation and icing, blockage and verification of empty lines, location welds in preparation for positive material identification, and changes in pipe size or schedule that may not be on drawings. The advantage of this technique is that it can inspect up to 200 locations per day compared to 20 to 50 locations by ultrasonic testing or radiographic testing methods. It also is safe because of its low exposure rates with no need to rope off the area around the inspection site. This technique is also thorough as it scans through the insulation (no need for cutting or removal) and scans everything within the beam: insulation, both sides of the pipe, and anything inside the pipe. The Section appreciates Charter’s time and effort and also wishes to thank all of its meeting sponsors: 3E NDT, LLC; DTM Enterprises; PH Tool Reference Standards; and Turbo Nondestructive Testing, Inc. 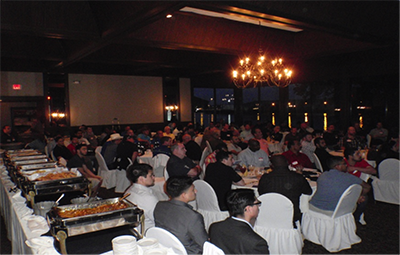 More than 100 members and guests attended the September meeting of the Greater Houston Section.

Fourteen members and guests of the Hampton Roads Section met at the Peking International Restaurant in Hampton, Virginia. The invited guests at this meeting were incoming ASNT President Kevin Smith and Regional Director William Via. Smith gave an interesting presentation concerning the strategies and goals for future growth and advancement of the Society. The presentation also included an open forum, where members’ opinions and thoughts were allowed to be heard. 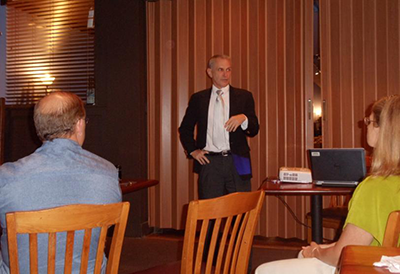 The Kuwait Section organized its first technical presentation of the current program year (July 2015 to June 2016) on 26 August at Kohinoor Restaurant, Fahaheel, Kuwait. The presentation, on “Ultrasonic Air-coupled Inspection of Advanced Materials,” was delivered by D.M. Tripathi, a renowned and valued nondestructive testing (NDT) professional. S.S. Murugan anchored the meeting, and Farukh Nasim introduced the speaker to the audience.

The program was sponsored by the Section, and approximately 30 professionals attended the meeting.

Compared to the frequencies of 1 MHz and higher used in most contact ultrasonic applications, the 400 kHz of the air-coupled technique may be considered relatively low. With the increasing application of foam and other very highly attenuative materials in the aerospace and infrastructure industries, the demand for an NDT technique for these materials has grown dramatically. It was further demonstrated that, using both frequencies, increased porosity could be distinguished from delamination and intermittent voids.

Mohammed M. Rajput proposed a vote of thanks and expressed appreciation for the speaker’s effort to deliver the presentation in a comprehensive and interactive manner.

Following the presentation, attendees discussed the need to continue working toward the Section’s objectives. There was a reminder of the ASNT NDT Level III exam on 17–18 December in Kuwait. Finally, Section officers stressed the need for awareness about NDT among the top management in the oil and gas industries to gain support.

The Mohawk Hudson Section met on 23 September for a tour of the Animal Protective Foundation shelter and spay/neuter clinic in Scotia, New York. There were four members and four guests in attendance. A member of the shelter’s staff explained how the pets are received, cared for in the shelter, prepared for adoption, and what training and other services they offer for pet owners. The Spay/Neuter Clinic tour was led by Jessica Durham, who explained how the pets are prepared and monitored during and after the surgery.

On 14 September, 12 members of the Pacific Northwest Section gathered for the scholarship award presentation. The annual student scholarship award was presented to Lakai Fairbanks, a first-year student at Clover Park Technical College (CPTC). In addition to the scholarship, Section Vice Chair and Co-chair of the annual golf scramble Flynn Spears presented Chuck Musson, of CPTC, with a clear magnetic yoke and magnetic particle inspection kit from Western Instruments, Inc. Dinner preceded a presentation on “Advances in Pulse Reflectometry” by Jeff Siegel, of AcousticEye, Ltd. One of the many advantages of pulse reflectometry when compared with eddy current for heat exchanger tubes is speed. Approximately twice as many tubes can be inspected in half the time as conventional tube inspection. After his excellent presentation, Spears presented Siegel with a certificate of appreciation and pen and pencil set from the ASNT International Service Center. 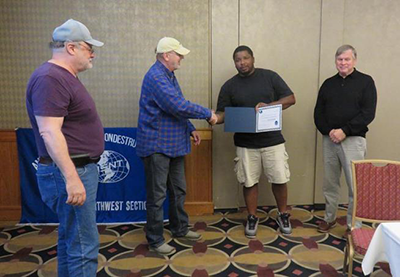 One 1 September, the San Diego Section hosted its first technical meeting of the 2015–2016 year. The meeting was held at the Best Western Seven Seas hotel in San Diego, California, with 26 members and guests in attendance.

The speaker for the meeting was Michael McGloin, who spoke on “Hiroshima, Then and Now.” The presentation covered a short lesson on the historical events surrounding the dropping of the atomic bomb on Hiroshima during World War II. McGloin went into detail about the results of the bombing, the devastation caused, and what the area looks like today.

To close the meeting, Morris acknowledged the vendors/sponsors in attendance prior to a raffle, and thanked them all for their support. All in attendance had a good time.

The Saudi Arabian Section held its third technical dinner meeting for fiscal year 2015–2016 on 15 September at the Gulf Hotel Bahrain, in Manama, Bahrain. The Section-sponsored meeting was attended by 251 Section members and guests, which included members of the Bahrain Society of Engineers.

Section Chair Fathi E. Al Qadeeb inaugurated the meeting and welcomed everyone who was attending the 7th Middle East Nondestructive Testing (MENDT) Conference. He mentioned the presence of incoming ASNT Chair of the Board L. Terry Clausing and his wife, Devon Clausing, as well as incoming ASNT Vice President David Bajula, who were there attending the Conference.

Al Qadeeb then highlighted the preconference workshops and distributed tokens of appreciation to the workshop instructors. He also presented an award to the organizing committee members of the 7th MENDT Conference. Abdul Majeed, president of the Bahrain Society of Engineers, expressed his appreciation for the leadership of the Section, Al Qadeeb, Mohammed Al Salih, and Publicity Committee Chair Muhammad Jamil Anjum, and awarded them with gifts.

After the 7th MENDT Conference award ceremony, Section members and guests retired to have an excellent buffet dinner specially prepared by the Gulf Hotel Bahrain. 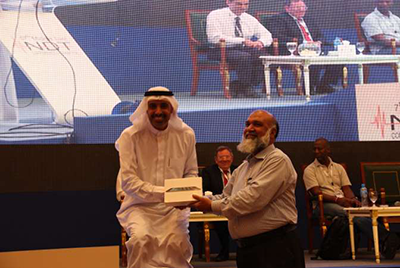 The August meeting of the Kuwait Section included a presentation on ultrasonic air-coupled inspection of composite materials, which are widely used in automobiles, engines, aircraft, wind blades, and the oil and gas sector. 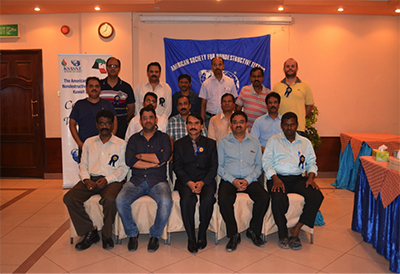