News items submitted by local sections for the month of April

The Atlanta Section visited the Atlanta Falcons/Mercedes Benz Stadium on 4 February. The tour was followed by lunch. Attendees enjoyed visiting the site, where many facets of nondestructive testing are being used in many areas of construction.

The Central Ohio Section participated in a Columbus Technical Societies (CTS) dinner meeting on 8 December 2016, located at the ASNT Center for Excellence in Dublin, Ohio. The topic of the meeting was an overview of ASNT and the new ASNT Center for Excellence (CFE), and it included a speech by ASNT Chief Technology Officer James E. Bennet. Attendees included 13 ASNT members as well as an additional 17 members of other CTS member societies. Pizza, salads, and drinks were provided to attendees by the Central Ohio Section. 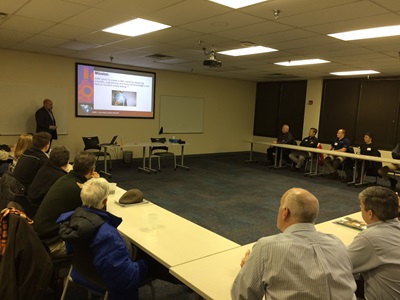 The Charlotte Section’s January meeting was hosted by Sonaspection at its Concord, North Carolina, facility. More than 30 members and guests came out to attend the meeting and traditional southern barbecue. Past Charlotte Chair Paul M. Ogletree (2016–2017) led the formal part of the meeting and gave everyone the opportunity for questions and discussion on local ASNT issues. Roy A. Duce, Sonaspection’s technical manager and past Section Chair, was recognized for his service to ASNT with a Lifetime Member Recognition. 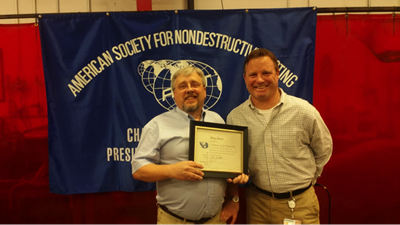 The Chicago Section of ASNT met on Monday, 13 February, with 22 guests and members in attendance at the Crazy Pour Restaurant in Villa Park, Illinois. The guest speaker was Stuart A. Kleven, from Alloyweld Inspection Company, a commercial NDT laboratory.

Stuart is an ASNT Level III in four methods and an American Welding Society certified welding inspector (AWS CWI). His talk for the evening was entitled “Understanding Defects.” The discussion started out with definitions of the various terms used, such as indication, discontinuity, relevant, non-relevant, true and false indication, linear, rounded, defect, and aspect ratio. He used the ASTM definitions from E1316 to describe each term. Three specific areas were addressed with regard to causes of defects: inherent, processing related, and service related types. He then discussed the importance of understanding the various steel making and manufacturing processes that can cause indications and what to expect or anticipate from each process. He highlighted forgings, sand and investment castings, brazing, grinding, heat treating, welding, extrusions, explosion cladding, friction stir welding, composites, press forming, ring rolling, steel making, and continuous casting. Numerous examples of each type of defect were presented to demonstrate what type of response NDT obtains from the various manufacturing methods and steel making processes, as well as service failures. 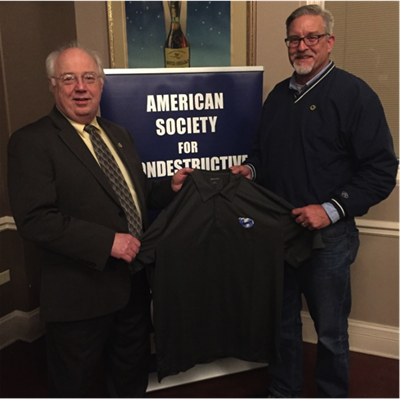 Evgueni I. Todorov, of EWI, was the guest speaker for the evening. His presentation was on “New Quality Measurement Technologies for Materials Joining Application.” During his presentation, he addressed some of the key aspects of nondestructive evaluation (NDE) measurements technologies in quality measurement systems, advanced manufacturing, and industrial metrology, as well as NDE gaps and trends, key factors enabling the development of advanced NDE technologies, and technology transfer in quality measurements and NDE. Several examples of advanced NDE measurements for product characterization—aerial topography, roughness and texture, computed tomography, and additive manufacturing real-time monitoring—were shown during the presentation. Finally, there was a live demonstration of array eddy current technology on additive manufactured parts.

Director at Large Greg A. Garcia was also present during this meeting. He presented a certification of appreciation and a gift to the guest speaker.

The Columbia River Section held a meeting on 12 January at Crazy Moose Casino in Pasco, Washington. Seven members and two guests attended. There was an informal technical presentation by Dianne Hillhouse and Ted Roman of Olympus on handheld X-ray fluorescence and positive material identification application using the Olympus Vanta analyzer. The group interacted well, with interesting points on analyzers, limitations, and ways of improving in the field and testing. The Section thanks Hillhouse and Roman for their interesting talk. 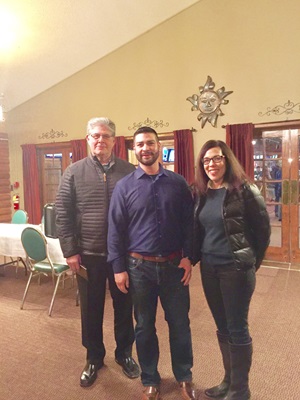 On 18 January the Connecticut Yankee Section hosted a presentation given by Magnaflux’s Regional Sales Manager, Greg A. Burdick. The presentation was held at the Groton Elks Lodge located in Groton, Connecticut, and was attended by 26 chapter members and their guests, as well as guests from several other ASNT chapters and faculty from Norwich Connecticut’s Three Rivers College. Burdick’s presentation was focused on the evolution of UV lamp and LED lighting technology, which are used in nondestructive examinations both in fluorescent penetrant and magnetic particle inspections. Valuable insight into the progression of industry standards concerning the use of these lamps was also provided, and Burdick was kind enough to allow everyone in attendance the opportunity to try out some of the equipment at the end of the evening. 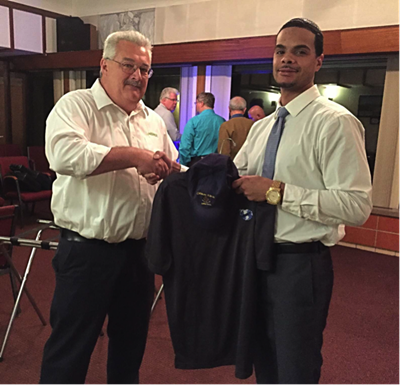 Chair James T. Porter (right) presents an ASNT polo shirt and “honorary member of the Elks” hat to Greg A. Burdick (left) in appreciation for his presentation.

On 9 February, nine members and guests of the Lewis & Clark Section met at Bughatti’s Restaurant in Oregon City for an early Valentine’s Day celebration with a special invitation for spouses to attend. Spouses were thanked for their ongoing support of the members’ work in support of ASNT. Following recognition of the spouses, Curt Powell presented information on the ongoing efforts of the Consumer Products Safety Commission in keeping childrens’ toys safe and the CPSC’s use of nondestructive testing (NDT) methods during their studies and investigations. Test Equipment Distributors generously hosted the meal for the members present. 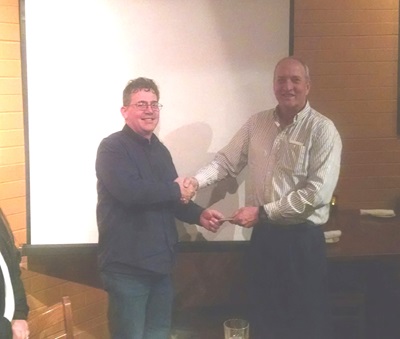 Co-Chair David F. Harris (right) presents Curt Powell with a gift for making the presentation on the use of nondestructive testing in the inspection of children’s toys to the section.

The Miami Valley Section board met on 11 January at Bravo’s in West Chester, Ohio. Nine members and guests came out to work on section issues and concerns and make plans for the future.

The North Alabama Section meeting was held on 19 January. A total of 11 people were present. The honored guest and speaker was Chris Macgruder from Olympus, and his presentation on dual matrix phased array was very informative and detailed. The Section thanks Macgruder for his presentation and hopes to see him soon on other topics. 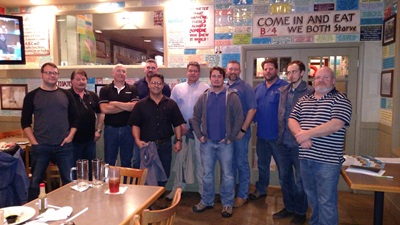 Members and guests of the North Alabama Section in attendance at the January meeting all enjoyed Chris Macgruder’s talk on dual matrix phased array.

Fifteen members of the North Atlantic Section toured the GB Inspection Systems Ltd., facility on 24 January. After a top-notch lunch provided by GB Inspection, attendees heard a talk on the development of the ultrasonic probe manufacturing company and a tour of the production facility. It was particularly interesting to see the streamlining of the production process by utilizing systems and procedures more often seen in automotive manufacturing plants. The Section thanks GB Inspection for hosting this meeting. 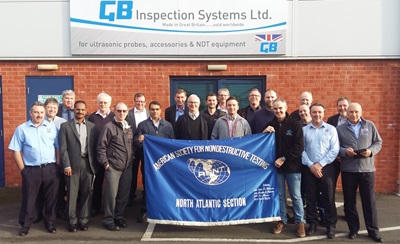 On 26 January, the North Carolina Student Section held their first meeting of 2017, which included a meet and greet for new students and Section members to get to know returning students and club officers in the program. Sixteen were present, and the meeting was held in the open lab at Central Piedmont Community College in Charlotte, North Carolina.

The Oklahoma Section hosted a successful meeting on 19 January at the Spartan College of Aeronautics. The meeting included a presentation by ASNT past President Charles J. Hellier entitled “The Path to Certification Through Online Training.” The 62 attendees were also registered to win one of two door prizes sponsored by NDT Classroom: a personally autographed second edition of the McGraw Hill Handbook of Nondestructive Evaluation or free registration to NDT Classroom for a course of the winner’s choosing. 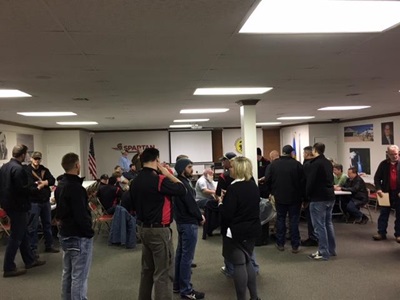 The Oklahoma Section hosted a meeting for 62 attendees at the Spartan College of Aeronautics with ASNT past President Charles J. Hellier as the guest speaker.

On 23 January, 19 members and guests of the Old Dominion Section gathered at Calabash Seafood Restaurant for a technical meeting. They were treated with a very informative presentation by Old Dominion member Charles C. Crim, an engineer at Froehling and Robertson, on forensic engineering of fire damage. The presentation was very interesting, and garnered a lot of questions from those in attendance. 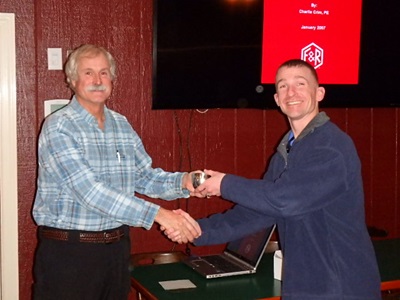 The Piedmont Section met on 13 December at the Local Cue, a sports bar in Greenville, South Carolina. ASNT past President Michael L. Turnbow, a retired quality and nondestructive examination (NDE) manager for the TVA fleet of nuclear and conventional power plants, provided an update on the status of the American Society of Mechanical Engineers (ASME) program for NDE personnel qualification, ANDE-1.

Turnbow is chair of the ASME ANDE committee. He explained ASME has developed and is implementing an NDE and quality control personnel qualification and certification program (ANDE). In keeping with ASME development of codes and standards, the NDE program was assembled by industry experts and is being administered centrally by ASME. This new ASME standard, approved by the American National Standards Institute ANSI and published by ASME on 18 November 2015, was first developed as the core of the program and based on industry best practices and lessons learned.

The total program is a significant paradigm change from the traditional employer-based and other central qualification and certification programs. The new standard includes features such as the systematic approach to training, job task analysis, and qualification cards to direct the development of training and experience. The program was designed to improve the skill level and performance of NDT practitioners and will use the performance-based approach, including psychometric practices in the development of both written and practical demonstration examinations.

The San Diego Section hosted its fifth technical meeting of the 2016–2017 year on 7 February. It was also “Past Chair’s Night.” The meeting was held at the Seven Seas Hotel in San Diego, California, with 35 members and guests in attendance. The speaker for the evening was Michael R. Collingwood, owner of A-Scan Laboratories, Inc. The presentation, “Applications of Laser Shearography Inspections,” described the basic methodology of laser shearography inspection and a brief history of its development. A number of specific applications were discussed along with some of the advantages and limitations of the technique. The current status of industry specifications and certification of personnel was also presented. There were a number of questions about comparisons to other nondestructive testing techniques, inspection time, test standards, and understanding the various techniques. Also discussed were applications and techniques used on space and aircraft flight hardware. 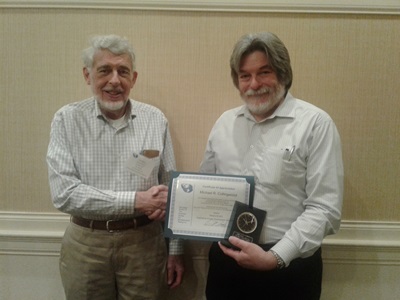 The Saudi Arabian Section held its seventh Technical Dinner Meeting for the fiscal year 2016/2017 on 16 January at the Carlton Al Moaibed in Dammam. The meeting was attended by 75 members and nonmembers, including guests from the Bahrain Society of Engineers sponsored by the Saudi Arabian Section. The meeting included a presentation by Section Chair Abdullah M. Al Khalifah on “Human Factors in Non-Destructive Testing,” which was knowledgeable and highly appreciated by the audience. After the presentation, Section past Chair Fathi M. Al Qadeeb and Section Vice Chair M. Jamil Anjum presented an appreciation trophy to Abdullah M. Al Khalifah. After this, all members and guests retired to have an excellent buffet dinner specially prepared by the Carlton Al Moaibed Hotel. 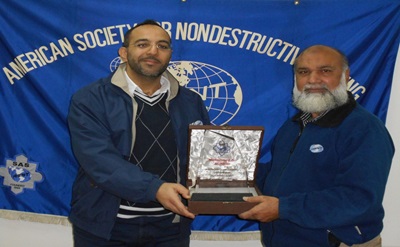 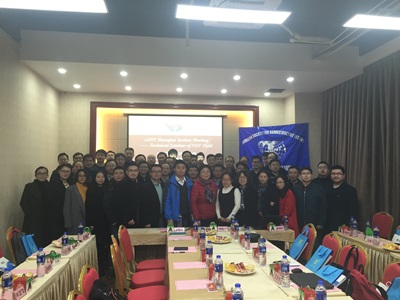 Johnny Rizos and Hugo de Lemos, from the South African National Space Agency Earth Observation, gave a wonderful presentation to the Southern Africa Section on 17 January at the School of Applied Non-Destructive Examination in Boksburg, South Africa. The title of the presentation was “Earth Observation via Satellite.” Attendees learned about the many satellites that provide different kinds of data to South Africa, as well as their capabilities and functions. They were also informed of the various kinds of maintenance and inspections done on the ground equipment, particularly satellite dishes. 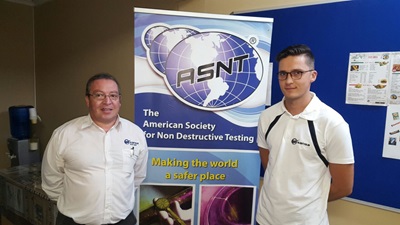 The Atlanta Section enjoyed visiting the Atlanta Falcons/Mercedes Benz Stadium, where many facets of nondestructive testing are being used, in many areas of construction. 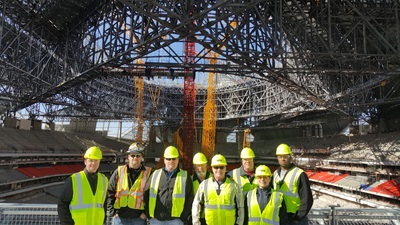