The Alaska Section held a meeting on 11 May with four attendees. The speaker was Emery E. Roberts, the Region 16 director and the Pacific Northwest Section secretary. He spoke of section reporting requirements and incorporating the local Section.

The Chicago Section met on 8 May with 22 guests and members in attendance at the Crazy Pour restaurant in Villa Park, Illinois. The guest speaker was Matthew Roberts from Virtual Media Integration (VMI), a supplier of computed radiographic systems. Roberts is the sales manager for VMI. His talk for the evening was entitled “Computed Radiography – Past, Present and Future.” The discussion addressed the history of computed radiography from the early 1980s until today. Roberts described the various types of computed radiography units and the resolution capabilities, as well as bit depths used on the various systems. He also addressed the codes and standards that have embraced the technology and what may be in store for the future. 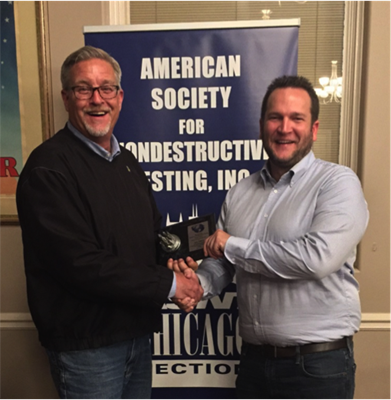 Fifty-nine members and guests attended the Connecticut Yankee Section’s annual joint meeting with the Thames Valley Section of the American Society for Quality, the New England Shoreline Section of the Society of Women Engineers, and the New London Section of the American Society of Mechanical Engineers. The meeting was held at the Groton Elks Lodge in Groton, Connecticut, on 17 May. In attendance were members from each of the Sections, as well as faculty from Norwich, Connecticut’s Three Rivers Community College; members from the Boston, Narragansett Bay, and Connecticut Valley Sections; and guests. The guest speaker for the evening was Chuck Veit, who is the president of the Navy and Marine Living History Association. This association is a nonprofit corporation dedicated to promoting public awareness of American naval history. Veit is the author of a number of research books on naval history and is a frequent speaker at historical societies and Civil War roundtables. Veit’s talk centered on the “Sea Miner,” a story of the US Navy’s top secret torpedo development program. At the end of the evening, the officers for the 2017–2018 were voted in.

On 10 May, the Greater Houston Section hosted 26 members at its monthly meeting at the Icon Hotel in downtown Houston. It was “Ask the Experts Night,” with senior members of the Section answering questions from moderator and Section Board Chair Jeffrey A. Wagner, NDT Quality Assurance LLC owner. The panel of experts included Samuel R. Jordan, Turbo Non-Destructive Testing, Inc.; John Z. Chen, Schlumberger; and Timothy S. Roach, Tenaris. The panel answered questions about their best moment in NDT, how they got into the NDT industry, and who mentored them into the NDT field.

The Hawaii Section meeting was held on 1 June at Buzz’s Original Steakhouse in Pearl City, Hawaii. Eleven members and guests were on hand to see the phased array ultrasonic technology (PAUT) presentation by Sean Killeen of Olympus. Killeen demonstrated next generation PAUT probes for compound scanning and high temperature use. All enjoyed the delicious foods, drinks, and private room atmosphere for this professional presentation.

The Miami Valley Section met on 3 May at Miami Valley Gaming to honor two members of the Section with the Sam Robinson Memorial Award (sponsored by Sherwin, Inc.). Nineteen members and guests attended to hear Jerry L. Nelson and Daniel C. Laufersweiler discuss their careers in nondestructive testing (NDT) and their history with magnetic particle testing and liquid penetrant testing. After the presentations, Lisa M. Price of Sherwin, Inc., presented the awardees with a certificate and cash award. Both Nelson and Laufersweiler, with their lifetime career dedication to NDT, are well-deserved recipients of this award.

The Section met on 2 June at the Heatherwoode Golf Club in Springboro, Ohio, for its June golf outing. There was great weather, great fellowship, wonderful golf, and a delicious dinner with door prizes for all due to the generous donations of the sponsors. 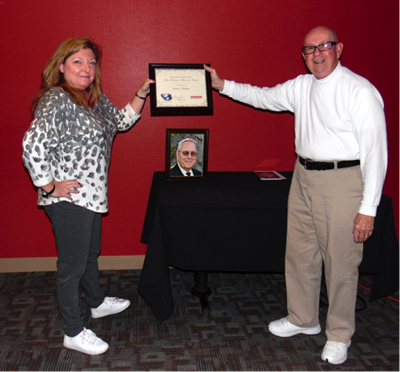 The 9 May dinner meeting of the Mohawk Hudson Section included a presentation on cosmology entitled “The Universe is Ringing Like a Crystal Glass” by Harry I. Ringermacher, a longtime member of the Section. Most are familiar with the concept of the Big Bang and the expanding universe. In 1998, it was discovered that the expansion has been accelerating. In 2014, Ringermacher discovered that the universe is not only accelerating but is also “wiggling” while expanding—in a sense, “breathing.” This may help solve the great mysteries of dark matter and dark energy. Ringermacher elaborated on the state of the art, his recent work in cosmology, and how it adds to the current knowledge.

The 9 May dinner meeting of the Mohawk Hudson Section included a presentation on cosmology from Harry I. Ringermacher.

The Narragansett Bay Section held a meeting on 23 May at the Atwood Grill in Johnston, Rhode Island. There were 26 members in attendance. Douglas G. Krauss of NDT Consultants LLC gave a talk on the nondestructive testing that was done for the space program. He worked for United Space Alliance LLC at the Space Center in Cape Canaveral, Florida, for 17 years.

John P. Moran, the incoming Regional Director for Region 1, and John A. Stringer, a past president of ASNT, were present at the meeting. This was the last meeting for the year. The Section’s year was very successful, and planning has started for next year’s schedule. 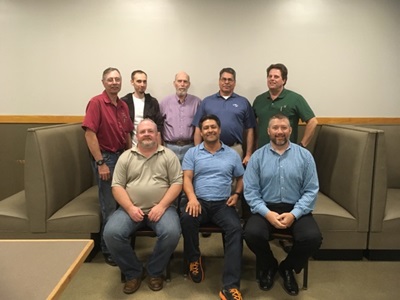 On 22 May, seven members and guests of the Old Dominion Section met at the Calabash Seafood Restaurant in Mechanicsville, Virginia. The meeting included a round-table discussion regarding potential speakers and events going into the 2017–2018 program year and a presentation entitled “Quality Control of High Strength Bolts at VDOT,” presented by Doug A. McAvoy, Jr., the state specifications engineer.

On 11 June, 22 members and guests of the Old Dominion Section gathered at St. John’s Church in Richmond, Virginia, to view a reenactment of Patrick Henry’s famous “Give me liberty, or give me death” speech. The Section then moved to the Half Way House Restaurant in Chester, Virginia, for a meal and a presentation from Rick Young, the proprietor, about the work and research of the Wright brothers while developing their aircraft. This proved to be a very entertaining and insightful social meeting.

On 2 May, the San Diego Section hosted its eighth Section Technical Meeting of the 2016–2017 year. The meeting was held at the Best Western Seven Seas in San Diego with 29 members and guests in attendance. The speakers for the evening were the San Diego ASNT Greater San Diego Science and Engineering Fair award winners.

Michael Verdolin, Jr. is a ninth grade student from Eastlake High School, and his advisor is Cheryl Bayley. His project title is “Preventing Bacterial Growth in Ultrasound Gel.” His abstract is based on a problem for medical uses of ultrasonic gel. This project received second place overall in his category.

Francisco Catanzaro is an eighth grade student from Pacific Beach Middle School, and his advisor is Jeremiah Potter. His project title is “Detecting Gopher Tunnels Using Ground Penetrating Radar.” His project attempts to use a ground penetrating radar (GPR) system to detect the location of a gopher tunnel underground. This project received first place overall in his category and progressed to state competition, where he received first place.

The students presented their projects very well, and fielded many questions from the group of NDT professionals. Each was presented a Certificate of Excellence, a gift, and a scholarship check from the Section. The Section thanks Denise L. McKay and Sarah L. Olsen, who represented the Section as judges.

The Section presented Certificates of Completion for the Radiography Level I course to Alaa Alshaltan, Jorge Hernandez, Daniel J. Perrine, and Dalvo Villela. Larry G. Olsen was the instructor. 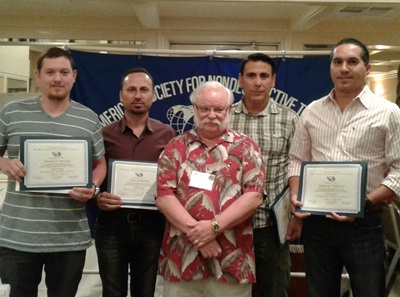 The Shanghai Section held its March section meeting on 27 March with 10 people in attendance. Two members attended the meeting over the phone. Yi-Cheng (Peter) Pan was invited to attend the meeting and share his experience from attending the ASNT Research Symposium in Jacksonville, Florida. 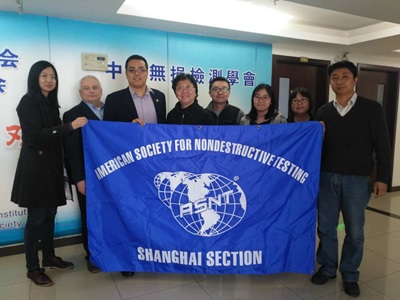 The Shanghai Section had 10 attendees at its 27 March meeting, which included a talk from Yi-Cheng (Peter) Pan about the ASNT Research Symposium.

The Southern Africa Section had another successful technical evening at the School of Applied Non-Destructive Examination on 9 May. Mark Du Plessis and Rudof Nel from Eddyfi Lyft gave a very informative presentation and practical demonstration entitled “Corrosion Under Insulation Detection (CUI).”

Members of the interim board of the United Arab Emirates Section, including Regional Director Marwan F. Basrawi, met on 6 May to discuss the upcoming program year, including committee activity and future conferences.

Members of the Southern Africa Section enjoyed a presentation and demonstration at the Section’s technical evening at the School of Applied Non-Destructive Examination on 9 May. 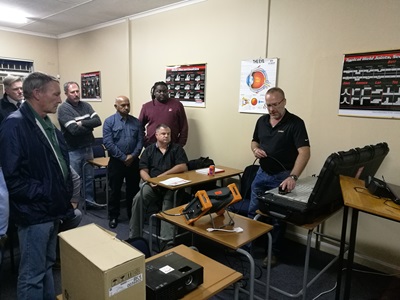