News items submitted by local sections for the month of January

The Atlanta Section held an Oktoberfest with approximately 30 people in attendance. Jim MacMillan, with ATS Marietta, spoke on “Ethics.”. The Section would like to recognize Chet Brown, for the catered barbecue; HT Testing, for covering the cost of the tables and chairs; and MFE Rentals, for hosting the event. The Section also thanks the vendors who came and displayed their products as well as all the members and non-members who participated. 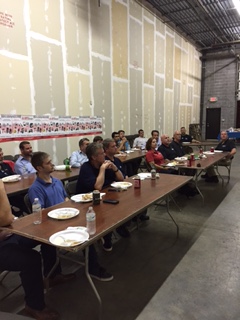 The Atlanta Section held a meeting in October.

The Greater Houston Section’s October meeting was held at the Hotel Icon with 55 members and guests. Prior to the evening’s presentation, there was an Executive Committee meeting, where 13 committee members were in attendance. The meeting was called to order by Tim Roach, and Special Committee issues were addressed along with the approval of prior meeting minutes and the treasury report.

Announcements included the ASNT Annual Conference 2016 in Long Beach, California. David Bajula, who was in attendance, was introduced as the incoming president. Bajula emphasized to everyone how important it is to participate in local sections.

The October speaker was Kimberley Hayes, who has more than 20 years of experience in chemical processing and nondestructive testing (NDT), and is a business development manager at Olympus. She gave a thoughtful presentation on “Pulse on NDT Industrial Needs.” 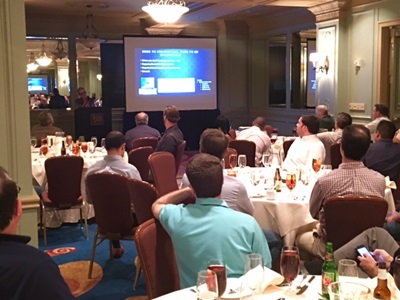 The Greater Houston Section held a meeting in October.

On 27 September, the Hampton Roads Section held its monthly meeting at Buffet City Mongolian Grill, in Chesapeake, Virginia. Nine members, along with Regional Director Bill Via and ASNT President David Bajula, were in attendance. Bajula was the speaker. His remarks centered on the plans for a revised ASNT Central Certification Program. The presentation was both enjoyable and educational in nature. 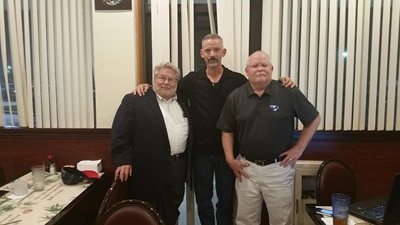 Regional Director Bill Via, a Hampton Roads member, and ASNT President David Bajula at the September meeting of the Hampton Roads Section.

On 11 October, 13 members of the Lewis & Clark Section met at Flying Pie Pizzeria in Portland, Oregon, to hear a presentation by welding engineer Chris Webb, PCC Structurals, Inc., addressing the recent changes to visual weld inspection requirements set forth by several aerospace manufacturers. Webb presented the history of what was previously permitted, the reasons for the upgraded requirements, and some examples of techniques and tools used to ensure accurate, consistent visual inspection of aerospace weldments. A question and answer session followed Webb’s presentation. Dinner was generously sponsored by Test Equipment Distributors. 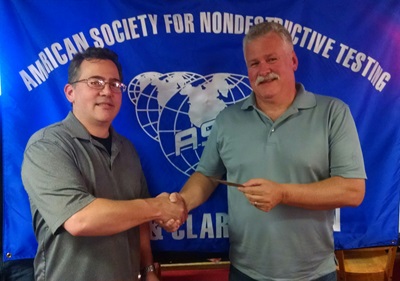 Lewis & Clark Section Co-chair David Harris (left) presented Chris Webb with a small token of appreciation for his presentation to the group.

The Mohawk Hudson Section’s 20 September meeting was a field trip, with 10 total in attendance. The Stephen and Harriet Myers Residence, located at 194 Livingston Ave., in Albany, New York, was a tremendously important part of the antislavery and Underground Railroad period. The Myers’s were the most influential people in Albany regarding the Underground Railroad in the 1850s. While they lived at a variety of buildings in Arbor Hill, this is the only one that still stands. This location also has the distinction of being documented in a flyer that has survived from that period.

Paul Stewart and Mary Liz Stewart, cofounders of the Underground Railroad history project, discussed the Myers Residence and described the part it played in history. The discussion included nondestructive testing conducted as part of the refurbishing of the structure while maintaining the heritage.

The North Alabama Section met on 15 September at Wintzell’s Oyster House, in Huntsville, Alabama. A total of 10 members attended. The board held a meeting prior to the member meeting, where there was a presentation by Chris Watters, from Newco, Inc. His informative presentation was focused on “Radiography in the Cultural Heritage Field.” The board presented Watters with an appreciation gift.

The event was held at Billy Baroo’s restaurant inside Fosters Golf Links just south of Seattle, Washington. The evening started with a putting contest of seven holes replete with obstacles. Past Section Chair Jeff Siegel awarded Starbucks gift cards for first, second, and third place, as well as for the most honest (that is, last place). Afterwards, a barbecue buffet was served.

Section Secretary Emery Roberts made a slideshow of past meetings, golf outings, and various activities, going back to 1957. The slideshow brought back fond memories to the veteran members, and inspired great conversations with newer members and students.

The event feedback was a resounding success. Thanks to Ferguson for going above and beyond, and to the members of the Section’s board of directors, who helped make this event a success. Hopefully the Section will see more new faces at its regular meetings and events throughout the coming season.

While one group from the Pacific Northwest Section was on the putting green, another group was partaking of barbecue.

The Vigilance Committee flyer, shown elsewhere on this site, along with other historic records, document that the Myers Residence was a headquarters for Underground Railroad activity in the mid 1850s. 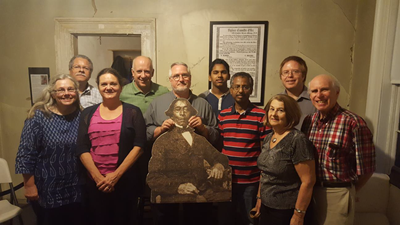 Members and guests of the Mohawk Hudson Section at the 20 September field visit to the Myers Residence.