The Capital of Texas Section met on 9 May at DK Maria’s Legendary Tex-Mex restaurant to host a presentation by ASNT Director at Large John Z. Chen of Schlumberger. Chen’s presentation was titled “NDT of Welds in Upstream Equipment for Oil and Gas.” He covered many types of welds used in the petrochemical industry and concentrated on the NDT used for inspecting welds of upstream components. Twenty-one members (many of whom were current NDT students) and guests attended the presentation, which was followed by a spirited question and answer period. 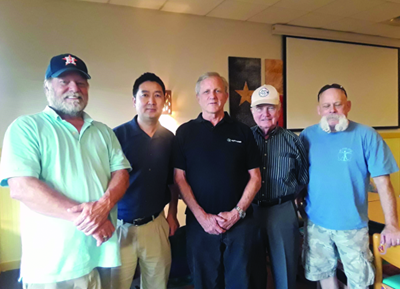 The Chicago Section met on 14 May with 18 guests and members in attendance at the Crazy Pour restaurant in Villa Park, Illinois. The meeting was generously sponsored by Finkl Steel of Chicago, Illinois, represented by Steven R. Nelson and Sam W. Korel.

The guest speaker for the evening was John C. Aldrin of Computational Tools in Gurnee, Illinois. Aldrin discussed how algorithms are developed and indicated that a large amount of data is needed for training and validation to achieve better accuracy. He highlighted the process, which includes data acquisition, raw data signal processing, feature classification, and finally an accurate callout of the defect type, orientation, and size.

Aldrin presented some case studies on aircraft that involved massive data collection to develop layers of neural networks with well-characterized data and validation through a probability of detection study. Aldrin then weighed the pros and cons of the use of artificial intelligence. He noted that the best use of artificial intelligence and algorithms is when there are massive amounts of data and the task is repetitive and tedious in nature. At this point, Aldrin summarized his presentation and revealed that intelligence augmentation is the best practice. In other words, the analyzed data still needs human review and input to improve the decision-making process and overall reliability. 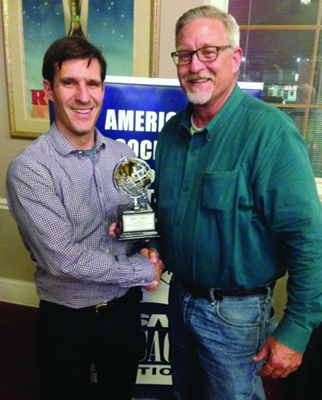 The Colorado Section welcomed Roche J. Faucheux, Jr., the NDT product manager from Chemetall, as the guest speaker for its 10 May section meeting, which was held at NDE Services Inc. in Denver, Colorado, with 11 members in attendance.

Faucheux presented “Penetrant Inspection Process: Misconceptions and Bad Practices.” During his presentation, he walked the attendees through the history of penetrant testing starting with one of the earliest NDE applications, which was the oil and whiting technique introduced around 1880 in locomotive repair facilities. He also presented on the history of penetrant to where we are today, while giving examples of missteps that have occurred in the manufacturing environment. He gave several examples when penetrant was either not done correctly or the wrong procedure was used to look for defects, and he explained how easy it is to miss critical defects if personnel are not properly trained in the method they are using. By the end of the meeting, each attendee had a better understanding of how penetrant is used and how manufacturing has benefited from nondestructive testing.

The Section held its board meeting on 12 June via Skype. A quorum of officers/board of directors was present. Some of the items that were discussed during this meeting included new officers and board of director members for the 2018–2019 program year and the election process, plans for events and activities for the 2018–2019 program year, bylaws changes, membership and retention, the Section website, the Section budget, and speaker gifts. Section Chair Anish Poudel also provided an update on the then-upcoming Section Leaders Conference, which was held from 22–23 June in Columbus, Ohio.

The Fort McMurray Section held its first meeting via Skype on 9 June. Six participants logged in to hear Malla Rao give a presentation titled “PMI Technology and Its Limitations.” Attendees actively participated during the Skype presentation and during the question and answer part of the presentation. The Section would like to invite other ASNT members who live in Alberta, Canada, to participate in future Skype Section meetings. Anyone interested may email Debbie Segor, ASNT sections coordinator, at dsegor@asnt.org. The meeting also included a discussion of Section engagement issues, including expanding the Section’s social media presence and following up with prospective members from the area.

The Israeli Section met on 25 June at the Holon Institute of Technology. Two lectures were presented. The first presentation was on risk-based methodology and was delivered by Amos Notea, head of the quality assurance and reliability program at the Holon Institute of Technology, and the second presentation was on risk-based inspection consequences and was delivered by Yossi Shoef of Gabi Shoef Ltd. 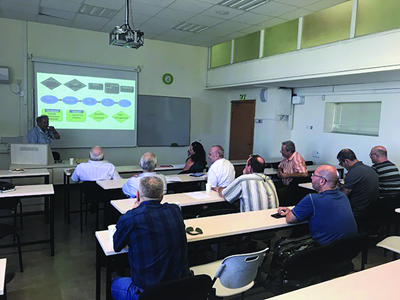 The Kuwait Section held its sixth technical presentation of the program year on 9 May at Kohinoor Restaurant in Fahaheel with 39 in attendance. Bharat Bhaskarbhai Upadhyay, of the International Inspection Centre, delivered a presentation titled “PAUT on Coarse Grain Structure Weld Joints.” D.M. Tripathi outlined the agenda of the Section meeting. Abdul Wahab Al Ahmad welcomed ASNT regional director Marwan F. Basrawi. Basrawi spoke about the GNDT Expo 2018 taking place in Dubai. The short courses, registration, and what to expect from the conference was explained, and more nominations/papers from the Kuwait Section are expected to make the conference more successful. Al Ahmad presented a memento to Basrawi. 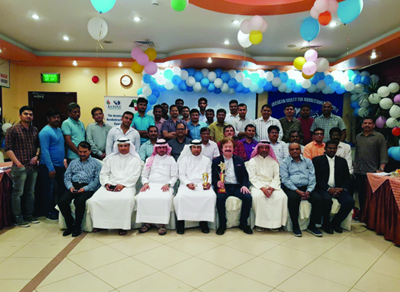 The Kuwait Section held a meeting on 9 May that included a technical presentation and information about the upcoming GNDT Expo 2018.

On 12 June, 14 members of the Lewis & Clark Section met to hear a technical presentation from Rick Bourdon on the use of NDT in the automotive industry, which included learning about the methods used, the basis of standards, and the volume of product reviewed. The Section would like to thank Bourdon for presenting a topic few attendees have had exposure to in daily inspections. Additionally, the Section would like to acknowledge Test Equipment Distributors for sponsoring the pizza for all who attended. 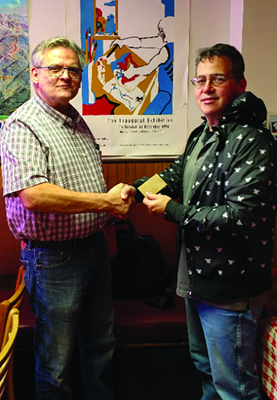 The Miami Valley Section met on 9 May with 18 guests and members in attendance at Miami Valley Gaming in Lebanon, Ohio. The guest speaker for the evening was David A. Stubbs of Universal Technology Corp., who presented on the US Air Force training program for eddy current inspectors. The title of the talk was “Bolt Hole Eddy Current Signal Interpretation - A Training Guide,” and was authored by Kenneth J. LaCivita, John McClure, and Ryan Mooers from the Air Force Research Laboratory’s Materials and Manufacturing Directorate – Materials Integrity Branch (AFRL/RXSA), along with Stubbs and Daniel C. Laufersweiler, both from Universal Technology Corp. 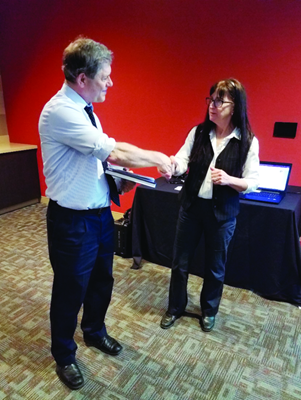 David A. Stubbs received a Miami Valley Section speaker gift from Victoria A. Kramb, University of Dayton Research Institute, for his presentation at the Section’s 9 May meeting.

The 8 May dinner meeting of the Mohawk Hudson Section was a presentation titled “Advanced Phased Array Inspection of Un-bored Steam Turbine Rotors” by Robert W. Bergman, director of General Electric (GE). The speaker discussed inspection coverage in the highest stressed areas of steam turbine rotors. The GE technique is a new and unique use of phased array ultrasound to provide complete volumetric inspection in the highest stressed, and often the most difficult, volume of material to inspect. Bergman is a nondestructive inspection engineer who has been working for 27 years at GE. He works for repair services and is mainly responsible for inspection system development projects involving software and robotic components to collect data and software applications to evaluate the data acquired. The dinner meeting was held at the Van Dyck Restaurant & Lounge in Schenectady, New York. There were 17 members and guests at the event.

The Narragansett Bay Section held a meeting on 29 May at the Atwood Grille in Johnston, Rhode Island. There were 16 members in attendance. The meeting featured the election of officers. John A. Stringer, an ASNT past president, was present at the meeting. The Section also invited Regional Director John P. Moran to the meeting and he attended.

The Old Dominion Section held its 9 June meeting at The Diamond stadium watching the minor league baseball team the Richmond Flying Squirrels split a double header with the Harrisburg Senators. Fourteen members and guests gathered to spend time together and enjoy some ballpark food on a beautiful summer evening. The Section will resume holding monthly meetings in September to begin the 2018–2019 program year.

The Pacific Northwest Section met on 14 May at the Old Spaghetti Factory in Tukwila, Washington, with 23 in attendance. The guest speaker was Sasha Matison, the CEO of JobWorthy™, who gave a presentation of the JobWorthy program used at the Clover Park Technical College NDT program.

JobWorthy is a cloud platform that colleges can use to create “competencies”—terms that hiring managers use to describe the specific knowledge, skills, and abilities they seek in a candidate. Employers then input talent needs in their own words and instantly see relevant competencies generated by JobWorthy’s artificial intelligence engine. This gives deans and instructors an accurate picture of how their students qualify for internships and jobs as they progress through their study. JobWorthy was founded in January 2016 and has been successful at Clover Park Technical College. Matison gives much of the credit for this success to Richard Hines, instruction designer for the mechatronics program of Clover Park Technical College, who played a key role in getting JobWorthy adopted by the program. 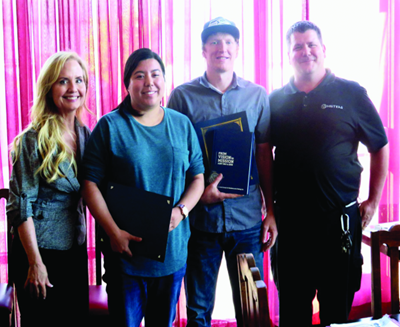 The Pittsburgh Section’s meeting was held on 17 May at Matergenics Inc. The hosts were Mehrooz Zamanzadeh and Anil Kumar Chikkam. Zamanzadeh presented an excellent summary of corrosion risk assessment and inspection and integrity assessment of pipelines. He also presented case histories involving unacceptable risks and gas pipeline explosions, along with a tour of his facilities. The Section would like to extend its thanks once again for the contributions of Zamanzadeh, Chikkam, and the entire staff of Matergenics. 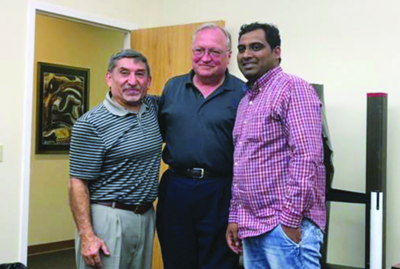 The Rockford Stateline Section held a meeting on 12 June. At the meeting, the Section elected the new officers for the 2018–2019 program year. There were 11 people in attendance.

The South Texas Section met on 30 May at the Royal Inn Oriental Cuisine restaurant. Section officer election results were announced at the meeting. In addition, Glenn M. Light delivered a presentation on the use of Status 5 probability of detection (POD) software. Light retired from Southwest Research Institute in October 2016, after 38 years of employment. At Southwest Research Institute, he was the director of research in the department of nondestructive evaluation. In early 2017, IHI Southwest Technologies (IHI) hired Light as a consultant to help with developing an optimized POD approach for nuclear power plant applications. In early 2018, Light became a part-time employee of IHI to continue work in the area of POD optimization and other NDE application technologies. 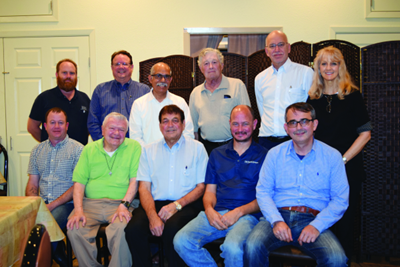 Attendees of the South Texas Section’s meeting on 30 May.

The Southern African Section held a meeting at the Trotters Pub & Grill Function Venue in Impala Park, Boksburg, on 24 May. Peter Beart and Andreas Mavrakis gave members a wonderful presentation on the future of 3D printing in industry, which was enjoyed by everyone along with a carvery-style meal. The new officers for the 2018–2019 program year were announced.

The Southern African Section’s 24 meeting included a presentation on 3D printing and the announcement of the 2018–2019 officers. Attendees enjoyed a carvery-style meal at the Trotters Pub & Grill Function Venue. 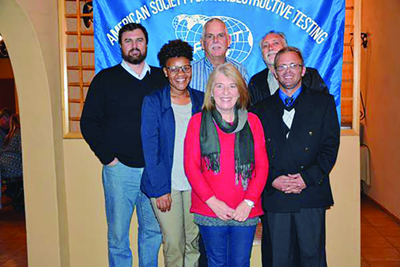