The Boston Section met on 27 September at the headquarters of FIBA Technologies Inc. in Littleton, Massachusetts. The meeting included an introduction to high-pressure gas containment technology and storage solutions for a variety of industrial gases, and a tour of the manufacturing facility given by FIBA’s Corporate Level III Alan D. Fugere. Following the tour, refreshments were served in the company’s cafeteria. The meeting was attended by Regional Director, Region 1, John P. Moran, and close to a dozen local members. 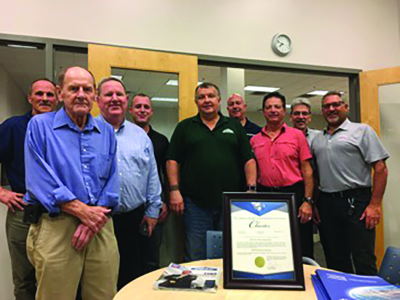 The Chicago sections of AWS and ASNT met for a joint meeting on 10 October with 43 guests and members in attendance at the Bohemian Crystal Restaurant in Westmont, Illinois. The guest speakers, Robert A. Hay III and Michael Chiappetta of Flood Testing Laboratories Inc., of Chicago, Illinois, discussed the topic “Visual and NDT Inspection in the Construction Industry.” Flood Testing Laboratories is now 105 years old. Hay and Chiappetta gave an excellent overview of inspection requirements in the building industry. They addressed both steel and concrete inspection as well as bolting inspection requirements. Inspection methods cited included ultrasonic testing, liquid penetrant testing, radiographic testing, magnetic particle testing, and visual testing. Ground penetrating radar was highlighted for concrete inspections. Next, they displayed a number of illustrations of defects using each of the test methods on various types of structures. The logistics of inspections on tall skyscrapers was discussed with limitations and safety concerns. They also are heavily involved in jobsite planning for inspections and welder qualifications. 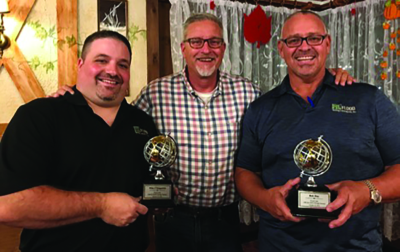 Fourteen members and guests from the Colorado Section met on 11 October for a tour of EVRAZ Rocky Mountain Steel steelmaking and rail mill facilities in Pueblo, Colorado. During the tour the group was provided an overview of the steel making and NDT processes for railroad rail manufacturing. 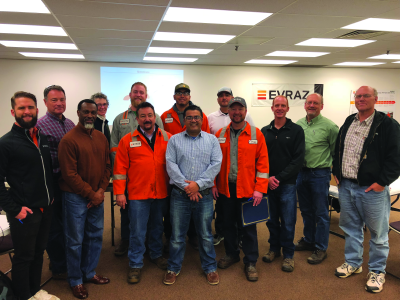 Attendees of the Colorado Section’s 11 October meeting learned about steel making and NDT for railroad rails. 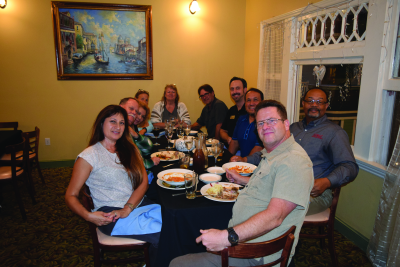 The ASNT Greater Philadelphia Section participated in a joint meeting with ASM International and the American Welding Society. Fifty-five attendees toured Laboratory Testing Inc. (LTI). The tour covered the following areas: the new state-of-the-art fracture and fatigue test lab, which was just completed; the machine shop; and the NDT departments, including radiographic testing and ultrasonic testing. The tour also included the destructive testing department and the mechanical, chemical, and metallographic testing areas.

According to Alreja and Zhou, in today’s world, delivering quality products to end-users is absolutely critical. Social media and the internet have made knowledge instantaneous and pervasive, and a misstep can cause catastrophic damage to a company’s reputation that has taken years to create. The challenge is that maintaining quality is not easy as there are too many variables at play, even in the cleanest of environments, and conditions can change almost instantaneously. The trick, then, is to be adaptable, and emerging technologies such as big data and blockchain are being adopted and harnessed to dynamically (and automatically) alter quality. Drawing upon some real-world examples from different industries, Alreja and Zhou presented on the future of quality and the role that NDE, and more specifically, X-ray plays in it.

The Lewis and Clark Section held their monthly meeting on 16 October at Flying Pie Pizzeria in Portland, Oregon. In attendance were 14 members. The Section had a technical presentation by Mark R. LaPlante from Pacific NDT Supply Inc. as the Olympus representative for the northwest. He held a discussion on precision thickness gaging and challenges that the industry faces in regards to UT operations. An interesting discussion followed on many applications that the members have performed thickness gaging on. Some of these examples included portable toilets, airplane windows, and streetlights. Chris W. Ierien gave a short update on the golf tournament that was held in August, which, after expenses, raised almost $3300 dollars for NDT student scholarships. The Section would like to thank sponsors Flying Pie Pizzeria for providing a room and TED for sponsoring the pizza and beverages. 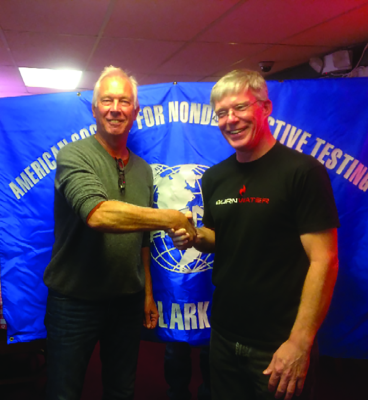 The Minnesota Section met on 27 September with 15 guests and members for an inspection and maintenance tour of the theme park Valleyfair, hosted by Bob Renner, CWI and site facilities manager. The two-hour event centered around Valleyfair’s inspection and maintenance program, with an in-depth look at their most significant rides with a perspective on dynamic force. The tour was delivered with a focus on nondestructive testing, welding, and design. After the tour, the group met for a Section meeting, appetizers, and discussion at Turtle’s Bar and Grill in Shakopee, Minnesota. The Minnesota Section would like to thank Renner and the staff of Valleyfair for an exciting look into the design, engineering, inspection, and maintenance of the park’s rides.

On 27 September, guests and members of the Minnesota Section participated in an inspection and maintenance tour of the theme park Valleyfair. 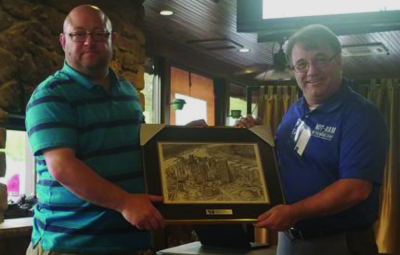 The Rockford Stateline Section held a technical meeting on 9 October at the Thunder Bay Grille in Rockford, Illinois. The guest speaker for the evening was Israel M. Vasquez of Vastek Consulting, Hanover Park, Illinois. Vasquez is a Nadcap auditor who audits nondestructive testing programs and company written practices and is contracted to examine personnel as a consultant. His topic for the evening was “ How to Administer a Specific Examination for NDT Qualification in Accordance with NAS 410-4.” Vasquez first covered the specification requirements and many of the problems that face company-responsible NDT Level IIIs with regard to creating adequate specific examinations. The requirement to have intuitive questions rather than to have to look up questions was addressed, and he displayed a few examples of what are considered adequate and inadequate questions. He also gave practical instruction on how to formulate questions and what materials should be used for the specific examination. All in attendance expressed appreciation for the presentation’s practical value.

The San Diego Section hosted its second technical meeting of the 2018–2019 year on 2 October at the Best Western Seven Seas in San Diego, California, with 19 members and guests in attendance. The speaker for this event was Peter Cawley, CEO of Kimtron Inc. The title of his presentation was “Total Cost of Ownership (TCO) of NDT X-ray Equipment.” Kimtron Inc. designs and manufactures all components of X-ray systems (for example, power supplies, coolers, and shielded cells), except the X-ray tubes. In addition to systems for NDT applications, they provide systems for medical and research applications.

Cawley emphasized the importance of considering the total cost over the lifetime of the equipment, from purchase to retirement, consisting of the following major cost elements: initial cost, cost of downtime of the equipment, operating costs, cost impact on production, and costs of service support and replacement after obsolescence. He broke down each of these cost elements into sub costs. The audience expressed its appreciation of the presentation and engaged the speaker with questions. The Section thanked Cawley and presented him with a speaker gift and certificate of appreciation.

Monthly raffle prizes were sponsored by Phil Fetto of BASF/Chemetall, David Waitt of Fujifilm, and the Section. 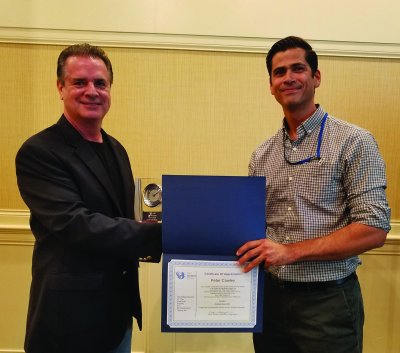 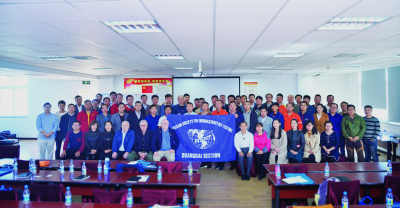 The Shanghai Section’s 12 October meeting included several presentations and was attended by then-Chairperson of the Board David R. Bajula (seated, left of flag), ASNT Executive Director Dr. Arnold Bereson (to the left of Bajula), and Regional Director, Region 21, and ASNT Board Director John J. Kinsey (to the left of Bereson). 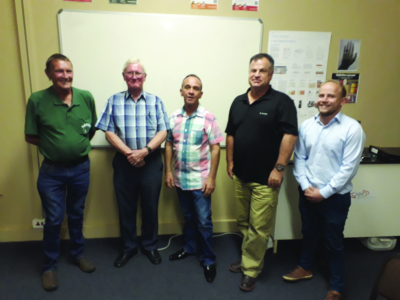 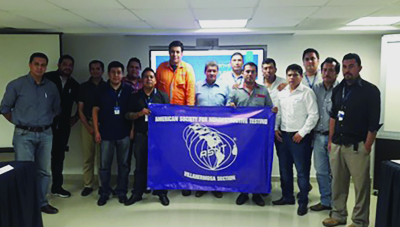