At the Acadiana Section’s February meeting, Christopher Reynolds, who participates in the nondestructive testing (NDT) program at Baton Rouge Community College, was awarded a $500 scholarship.

The Hawaii Section held its quarterly meeting on 7 June at Buzz’s Original Steak House in Pearl City, Hawaii. In attendance were six members and guests. The meeting included a discussion about Section funds, the design of local Section t-shirts, and the status of the newsletter.

Section Treasurer Jack R. Laws reviewed recent Section deposits. Section Chair Derek Barbadillo proposed that new members receive a local Section t-shirt upon joining, and logoed polo shirts should be given to current program year officers. All in attendance voted yes to the proposal. Section Director Jayme J. Martin is finalizing the newsletter, and a distribution list for recipients is being generated. 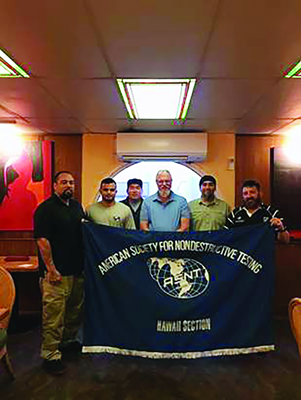 The Miami Valley Section met on 1 June for its annual season-ending golf outing. The event had 32 golfers who enjoyed the Heatherwoode Golf Course in Springboro, Ohio. Though thunderstorms came through at about the halfway point, no one let it dampen their spirits. Attendees had a great time and a fabulous dinner. The Section would like to thank the following sponsors for providing door prizes: the American Institute for Non-destructive Testing (AINDT), American Testing Services, A-Lab Corp., Sherwin Inc., Magna NDT LLC, Test Equipment Distributors, and The Modal Shop Inc. 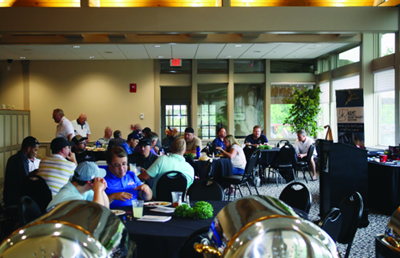 The Miami Valley Section held its season-ending golf outing on 1 June at the Heatherwoode Golf Course in Springboro, Ohio.

The Mohawk Hudson Section held a board meeting on 5 June at the Van Dyck Restaurant & Lounge. Nine members were in attendance, including Regional Director, Region 2, Lawrence E. Mullins Sr. The 5 June Section board meeting was held to discuss the 2017–2018 program, possible topics for the 2018–2019 year program, officers and board members selection, website status, and budget status. Based on the discussions and the election that followed, this year’s officers and board members will continue on for the next year. David A. Miles was added to the board of directors. 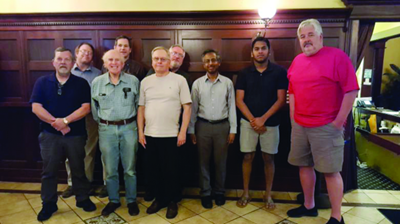 The Pacific Northwest Section held a meeting on 16 May at the Blue Origin factory with 24 in attendance. Section members Kathy L. Ferguson, Matt K. Mead, and William D. Meade organized a tour of the Blue Origin factory for the NDT students currently attending Clover Park Technical College. The tour began with an inspiring video presentation about the history of the various spaceships Blue Origin has built and is currently building. Multiple Blue Origin NDT technicians and engineers gave presentations and demonstrations about the work they do in ultrasonic testing, liquid penetrant testing, radiographic testing, and computed tomography. 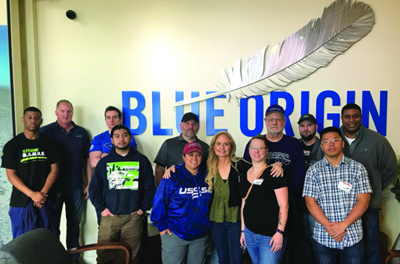 On 9 June, the San Diego Section hosted its ninth Section meeting and “Change of Gavel” for the 2017–2018 program year. The meeting was held at the 94th Aero Squadron Restaurant in San Diego, California, with 15 members and guests in attendance. The speaker for this event was Denise L. McKay, outgoing Section chair. McKay presented on the state of the Section and the accomplishments made during the 2017–2018 program year. She then passed the gavel to incoming Section Chair Ramon Thomson. A review of the new officers and board members was discussed, as well as the responsibilities of each officer and board member.

The Saudi Arabian Section held a dinner meeting on 25 June at the Carlton Al Moaibed Hotel Dammam. The meeting was attended by 90 members and nonmembers, including guests from the Bahrain Society of Engineers. Section Past Chair Fathi E. Al Qadeeb welcomed everybody to the meeting and introduced Section Chair Abdullah M. Al Khalifah, who distributed appreciation awards to the five companies who sponsored the Section’s monthly meetings and handed out Eid greetings and gifts to all attendees.

The Shanghai Section held a meeting on 3 July. The meeting was attended by 50 members and guests. Regional Director, Region 19, Marwan F. Basrawi was invited to give a speech about NDT in the Middle East. Section Chair Ji Jingyuan and Regional Director, Region 19, John J. Kinsey greeted everyone in attendance and thanked them for supporting the Section. The meeting was hosted by Yxlon International. Ten presentations were given.

On 4 July, Basrawi and Kinsey attended a meeting held at the Chinese Society for NDT (ChSNDT). Basrawi gave a brief introduction about NDT in the Middle East and the development of ASNT Region 19. Jingyuan gave Basrawi a tour of the computer-based testing (CBT) room, where ASNT Level III examinations are held, and of the practical examination rooms. Kinsey announced the new regulations of the CBT retake examinations, and he also discussed organizing more ASNT section meetings in other areas of China with the board members of the Shanghai Section.

On 6 July, Basrawi and Kinsey attended the International Far East Forum on Nondestructive Evaluation/Testing in Xiamen City. It was reported that 800 people attended the conference. Both Kinsey and Basrawi encouraged Chinese NDT experts, technicians, and students to get ASNT certification and attend a Shanghai Section meeting. 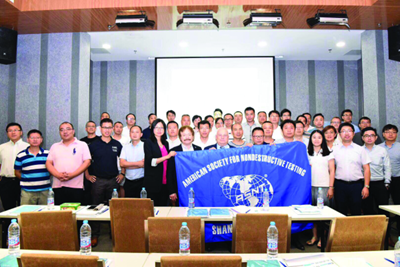 Attendees of the Shanghai Section’s meeting on 3 July, which featured several presentations.

The Southern Africa Section held a very informative technical meeting on 19 June at the School of Applied Non Destructive Examination (SANDE) in Impala Park, Boksburg. Garth D. Appel, manager of the South African Institute for Non-Destructive Testing (SAINT) Professional Body for NDT, gave a presentation on the new South African Qualifications Authority accredited NDT qualification, which should come into place in the next few months in South Africa. There was a good turnout, and everyone enjoyed the usual pizza.

The Section held its first board meeting of the 2018–2019 year on 17 July, at SANDE. The new board members are all excited about their upcoming projects and vision for the Section. Topics on the agenda included technical meeting ideas, career outreach and educational projects, ACCP exams, and upgrading the website. For the first time, there are now two women holding officer positions on the Section’s board. 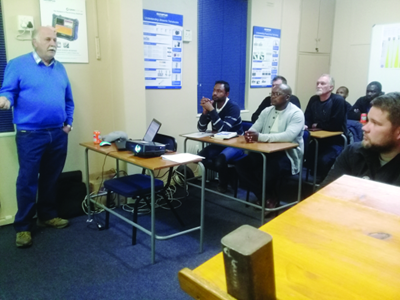 The South African Section held a meeting on 19 June that included a presentation from Garth D. Appel (standing). 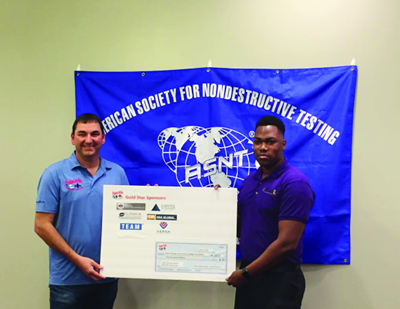