The Central Ohio Section met on 2 December at the Ohio State University (OSU) in Columbus, Ohio. Four ASNT members met up with 28 members of other Columbus technical societies to tour and listen to a presentation about the Gear and Power Transmission Research Laboratory (GearLab) at the OSU College of Engineering. The GearLab, formerly known as the Gear Dynamics and Gear and Power Transmission Laboratory, is a research group dedicated to aiding sponsoring industries and government agencies by enhancing gear and power transmission technology through fundamental and applied research, transferring research results, providing graduate and undergraduate students with applied educational and research opportunities in gear and power transmission related disciplines, and keeping sponsors updated on the latest gear and transmission technologies.

The Charlotte Section held its annual holiday party on 6 December at Red Hill Brewing Company, with 12 members, seven students, and eight guests in attendance. Section Chair Bradley W. Brandt greeted the attendees, then everyone enjoyed a catered dinner. Brandt and Treasurer Justin M. McCall led the gift exchange, after which Brandt made a special announcement to the Section, naming North Carolina Student Section Chair Muriel Magloire as the 2019 recipient of the ASNT Charlotte Section Scholarship. The Section would like to thank all attendees, with a special thanks to Vice Chair Kirsten Groenewald for her efforts in making the party a success. 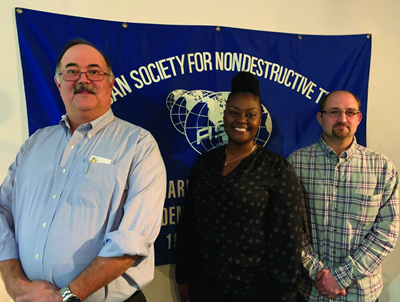 The Chicago and Rockford Stateline Sections held a joint meeting on 13 January with 38 guests and members in attendance at the Crazy Pour Restaurant in Villa Park, Illinois. The guest speaker for the evening was ASNT President Michael V. McGloin of NDT Enterprises. McGloin gave a presentation on “The Value of Mentoring.” Before his presentation, he gave an update on the ASNT International Service Center and the activities that occur there. He also highlighted the Industry Sector Qualification (ISQ) examinations. The discussion for the evening addressed the importance and benefits of mentoring and highlighted the various ways in which mentoring strategies can be applied to the nondestructive testing industry, as well as within the local Section. McGloin then asked for suggestions on how ASNT could better serve their members, and a number of ideas were submitted by those in attendance. A 50/50 raffle was held with the proceeds being applied toward a scholarship for a Moraine Valley Community College student. 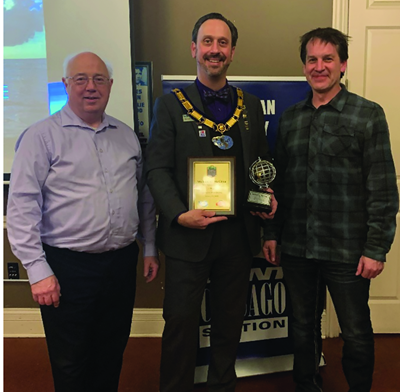 Twenty-four members and guests gathered at the Brew Garden in Middleburg Heights for a meeting on 18 November. The speaker was Anthony C. Sansavera of Test Equipment Distributors LLC (TED) who spoke on the conversion of MP inspection lights from mercury vapor to LED technology. Sansavera noted that the mercury lights are quickly being phased out and stated that NDT shops need to prepare for the budgetary allocations required for the more costly, but longer-lasting, LED lights. Sansavera also brought several different LED systems for a hands-on demo. The Section would like to thank Sansavera for his informative presentation and demonstration.

Seventeen members and guests attended the meeting of the Connecticut Yankee Section at the Groton Elks on 15 January in Groton, Connecticut. Members from Connecticut, Boston, and Rhode Island, along with students and a professor from Connecticut’s Three Rivers College in Norwich, were in attendance. Chair Rachel L. Taylor introduced the guest speaker Mike C. Tsao, an adjunct professor at the University of Connecticut, Avery Point campus. Tsao gave a presentation on his historical work at Electric Boat shipyard in ultrasonic inspection. His talk outlined the characteristics of ultrasonic waves in materials, highlighting the group efforts in the development of the ISO standards ISO 10375 (on the characterization of an ultrasonic testing [UT] search unit and sound field), and ISO 12715 (on UT reference blocks and test procedures for the characterization of contact search unit beam profiles). Secretary Kari E. Thibodeau presented a clock globe to Tsao in appreciation for this presentation. 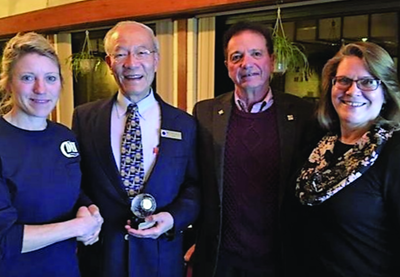 On 14 December, nine members of the Greater Houston Section volunteered their time at the Health Museum of Houston in partnership with the Duke TIP program, a one-day event that highlights real-world professions. The program is designed to introduce various careers to a group of gifted and talented sixth graders from schools in and around the Houston area. Eighteen students attended and participated in six different NDT method demonstrations. The demos provided the students with motivations, challenges, and advanced interactive learning opportunities, while looking into the NDT profession. The day was geared toward giving them an overall view of the profession and providing hands-on experience and piquing their minds at the same time. The volunteers enjoyed themselves and received positive feedback from the students and parents alike. The Section looks forward to doing another program with the Health Museum next year. 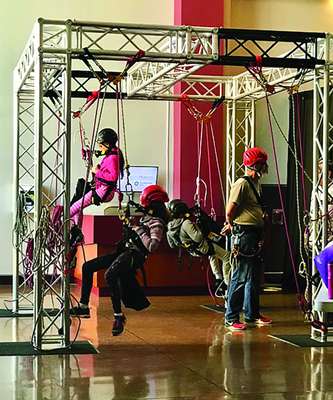 The Israeli Section held a technical meeting on 31 January. An educational lecture was presented by Binyamin (Benjamin) Magoz on “Ionizing Radiation.” The Section would like to thank Josef Pessach and Amichai Aharon Pessach for hosting the Section at their new laboratory.

The Kuwait Section held their fourth technical presentation of the current program year on 29 December at Hotel Kohinoor in Fahaheel, Kuwait. About 29 professionals attended the meeting. Department head S. Suresh Kumar of M/s NBTC Group presented on “SCAR – Small Controlled Area Radiography.” The technical presentation provided an explanation with practical figures that were useful for NDE professionals. D.M. Tripathi welcomed all the participants and Surya Prakash and Mohammed Taqiuddin delivered the Section news and activities to the audience. A. Mohammed Rajput presented a vote of thanks and acknowledged S.S. Murugan and Tripathi, who coordinated all the arrangements for the event. The technical meeting was followed by dinner. 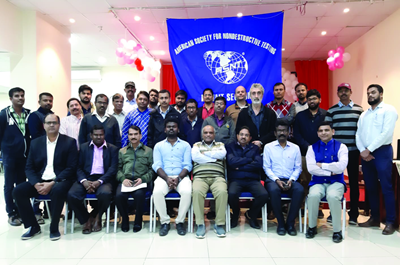 The Lewis & Clark Section welcomed director Zeki Cosku Gokce of Eddyfi Technologies, who presented on the pulsed eddy current technique at their January meeting. For the majority of the group, this was an unfamiliar technique. The Section members enjoyed learning about the processes. The Section would like to thank Eddyfi Technologies for sponsoring the speaker’s trip and Test Equipment Distributors (TED) for sponsoring the pizza.

The Minnesota Section met on 16 January at the American Legion in Chanhassen, Minnesota, with 13 members and guests in attendance. Kent Peterson of NAC Image Technology presented on “Nondestructive Testing with High-Speed Cameras.” The Section would like to thank Peterson for his exciting and informative presentation. 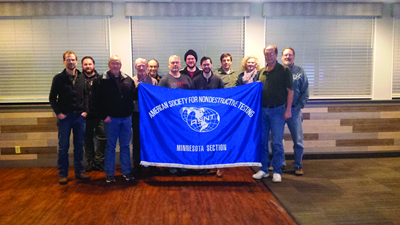 On 10 December, the Mohawk Hudson Section met for dinner and a presentation by Baker Hughes Inspection Technologies on developments in robotic inspection techniques. There were 15 people in attendance. In recent years, there have been many changes in practices involving hazardous entry inspections, which have prompted the development of robotic inspection techniques to enhance inspector safety. There have also been advances in the use of drones to inspect hard-to-reach areas, which decreases downtime and increases inspector safety. The presentation discussed some of these advances. 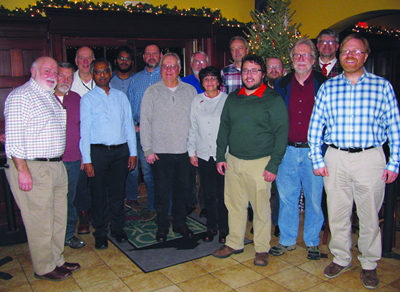 The Narragansett Bay Section held a meeting on 28 January at the Atwood Grill in Johnston, Rhode Island. There were 20 members in attendance. Regional Director, Region 1, Lawrence (Larry) E. Mullins, Sr. was the guest speaker. His topic focused on the developments of ultrasonic equipment in codes for standards for weld inspections. Past ASNT Presidents Robert A. Feole and John A. Stringer attended as well. The Section would like to thank all who attended.

The Old Dominion Section held its first technical meeting of the new year at the Calabash Seafood Restaurant on 27 January. John Lindemann, P.E., of the Virginia Department of Transportation (VDOT) for the Richmond District was the speaker. Lindemann manages the District’s Bridge Safety Inspection Program. He discussed the history of the program, which began shortly after the Silver Bridge Disaster, and the practical problems of obtaining proper inspections of in-service bridges. At the conclusion of his presentation, the Section presented Lindemann with their traditional speaker’s gift, an engraved Jefferson Cup. The Section was pleased to have 20 members and guests attend the meeting.

The Pacific Northwest Section held a meeting on 3 December with 10 members and guests in attendance at the Great American Casino in Tukwilla, Washington. The Section’s own Regional Director, Region 16, Emery E. Roberts presented a summary on the ASNT 2019 Annual Conference. In addition, attendees watched a video from the ASNT International Service Center’s video library titled “Nondestructive Testing in the Railroad Industry” presented by Anish Poudel. 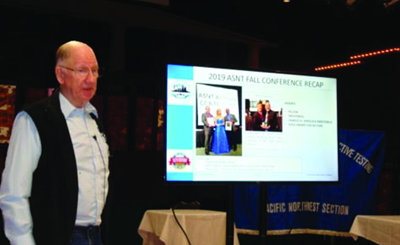 The Piedmont Section held a technical meeting on 15 January at the Hilton in Greenville, South Carolina. Eleven members were in attendance. The meeting started with networking, followed by a buffet dinner. After dinner, Thomas (Thom) P. Dunn and William (Bill) C. Plumstead, Sr., were presented with certificates of appreciation for their years of leadership service to the Section. Michael J. Ruddy of NOV Tuboscope and current chair of the ASNT SNT-TC-1A Subcommittee presented on “The 2020 Edition of SNT-TC-1A.” Ruddy’s presentation pointed out five different areas where the 2020 edition was updated. Plumstead presented Ruddy with a copy of ASNT’s 75th anniversary book. The Section thanked Ruddy, then held a brief business meeting. The treasury remains in good shape. A new logo was chosen and will be submitted to the ISC for approval. Members were reminded that meeting details, news, and sponsors can be found on the Section website. 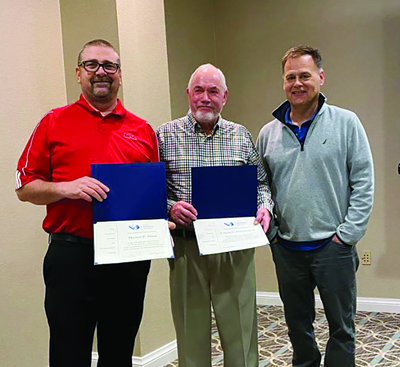 The Pittsburgh Section hosted their first meeting of 2020 at the Sports Grille in Cranberry, Pennsylvania. The Section would like to thank Scott Kellar of Baker Hughes for presenting on UT technology. The meeting had a great turnout. 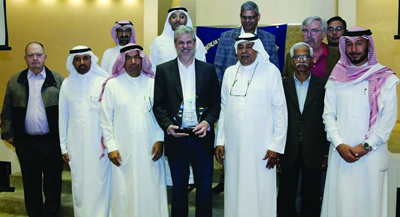 On 18 December, the Shanghai Section met at the Chinese Society for Nondestructive Testing (ChSNDT) office in Shanghai, China. Six members attended the meeting and two members called in. 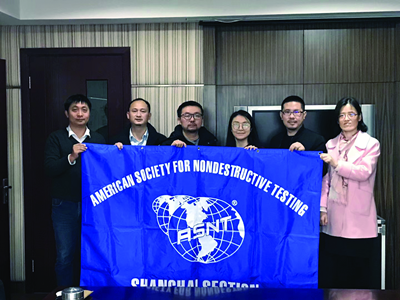 On 29 January the South Texas Section held a meeting at Yaya’s Thai Restaurant. The presentation, titled “Pulsed Eddy Current and CUI Applications” was given by Jeffrey Baxter of Eddyfi Technologies SA. Sixteen members and guests enjoyed the presentation.

The Southern Africa Section had their first meeting of the year on 30 January. It was a well-attended committee meeting where nominations for next year’s committee were discussed. The upcoming golf day, fundraising, and prizes were on the agenda, as well as topics for upcoming technical meetings. The silver-level President’s Award will be displayed in May at the AGM.