On 15 September 2017, the Charlotte Section joined together to kick off the year at the 23rd Annual Shrimp Boil. The agenda for the night included the Section’s monthly meeting for September, the introduction of the special guests (incoming ASNT President David A. Mandina and ASNT Executive Director Dr. Arnold Bereson), the swearing in of the new officers, and local Section news. Attendees of the meeting then enjoyed an evening of live music, a delicious shrimp boil dinner, and great conversation. The Section would like to extend a special thank you to both the guests and to FlawTech for sponsoring the event. 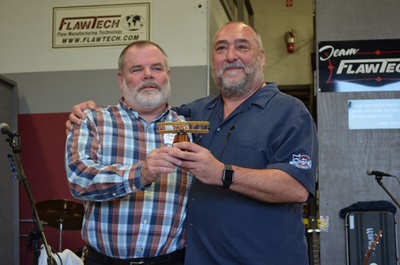 The speaker for the joint meeting of ASNT and AWS Chicago Sections on 11 October 2017 was Stuart A. Kleven, the quality engineer and responsible Level 3 at Alloyweld Inspection Company in Bensenville, Illinois. Twenty-eight members and guests were present at the Bohemian Crystal Restaurant in Westmont, Illinois.

Kleven’s talk was titled “Fabrication and Inspection of Caustic Pumping Skids.” Alloyweld fabricated all the 316 stainless steel piping on two pumping skids. The work was performed to ASME B31.3, normal fluid service, and an extensive customer project specification. The customer supplied the piping components, skids, pumps, valves, and pulsation dampeners. Alloyweld developed and qualified the weld procedures, qualified the welders, built the piping subassemblies, tested, and then assembled the systems. A final operational test was performed along with hydrostatic testing. The piping subassemblies underwent computed digital X-ray inspection of all the welds, positive metal identification of all components and welds using X-ray fluorescence, visual inspection, borescopic inspection of the weld roots, liquid penetrant inspection of the welds, and a baseline ultrasonic wall thickness check of all piping components. A detailed mapping and documentation package was also included. 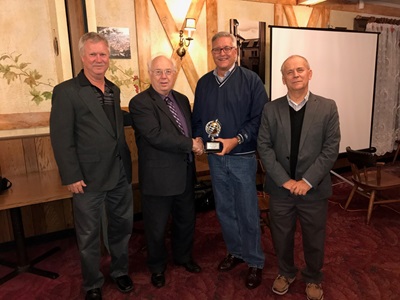 The Cleveland Section held its first regular meeting of the 2017–2018 year on 16 October with 25 members and guests in attendance. Clyde Mays, from Virtual Media Integration, gave a very informative and entertaining presentation on computerized radiography that had the attendees involved in a lengthy and animated question-and-answer period after the presentation. There were also many comments and questions during Mays’s presentation, which he seemed to thoroughly enjoy. The Section’s new location, Brew Garden, provided excellent food as well as the craft beers enjoyed by many of the attendees.

The technical speaker for the night was Michael Hull of Olympus Scientific Solutions. The topic for the presentation was “Applications of XRF & XRD for Inspection and Non-Destructive Testing.” Hull described the applications for X-ray fluorescence in positive materials identification, how the technology is different from radiographic testing, and how it gets measurements from the material being tested.

Meeting sponsors included Turbo NDT, Magnaflux, and SGS. After door prizes were given out, the meeting was closed. 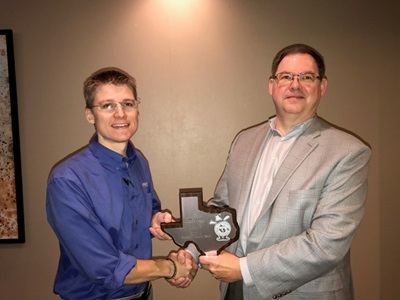 The Kuwait Section held a technical dinner meeting on 4 October 2017 with 20 members in attendance. Regional Director Marwan F. Basrawi was in attendance and provided advice on section management. 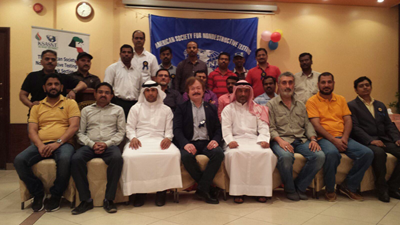 The Miami Valley Section met on 6 September 2017 at Premier Shooting & Training Center to start the 2017–2018 season. Fifteen members came out for some shooting practice and also some friendly competition. Attendees had a great time, and the Section is looking forward to the upcoming season.

The 26 September 2017 dinner meeting of the Mohawk Hudson section included a presentation titled “Asset Integrity through Custom Ultrasonic Solutions and Permanent Monitoring Technologies” by James N. Barshinger of Sensor Networks, Inc. (SNI). SNI is a three-year-old company focused on custom ultrasonic transducers, permanently installed corrosion monitoring solutions, and remote visual inspection. The presentation started with a brief introduction to SNI and its products and capabilities. Two case studies followed, with the first involving the development and deployment of a custom ultrasonic transducer solution for aircraft inspection, including the use of solid modeling and ultrasonic beam simulation to create transducers with highly targeted inspection zones. The second case study was on permanently installed corrosion monitoring at two refinery applications.

The Narragansett Bay Section held a meeting on 26 September 2017 at the Atwood Grill in Johnston, Rhode Island. There were 30 members in attendance. Lawrence E. Mullins, Sr., the Regional Director for Region 2, gave a talk titled “The Role of NDE in Pipeline Construction and Maintenance.” All attending enjoyed the talk and asked many questions. 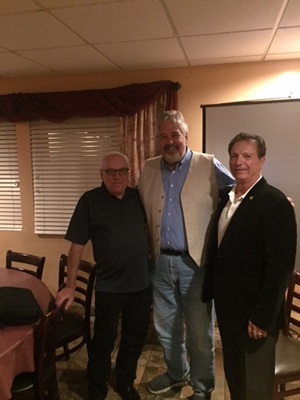 The North Alabama Section held a meeting on 27 September 2017. The meeting included a technical presentation on technology advancements within computed tomography from Steve Zahorodny of GE Inspection Technologies. Zahorodny, who has 25 years of industrial radiographic testing experience ranging in applications of engineering, product management, and sales, promoted the implementation of a wide range of digital radiography, computed radiography, and computed tomography solutions. 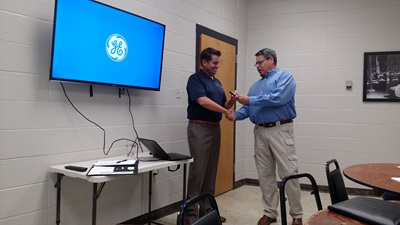 The Northern New England Section hosted a technical meeting on 10 October 2017 with 15 people in attendance. The meeting featured a presentation by Antoinette Bailey titled “A Level’s Guide to Meeting NAS-410 Revision 4.” The Section also discussed plans for future meetings, including locations, student attendance, and possible joint meetings with other societies.

The Pacific Northwest Section held its second annual social event at Billy Baroo’s Bar and Grill at Foster Golf Links in Tukwila, Washington. The theme of this section year is “Building Connections,” and the point of this social event was to see old friends, meet new ones, and renew connections. The Section had a nice turnout for the social, with about 30 people in attendance. The event featured a beautiful buffet dinner with a no-host bar. There was also a fun mini golf game on Foster's practice putting green, including a putt-putt challenge with a Starbucks gift card as a prize for the top three putts. Prizes were also distributed through a raffle. The Section started out this year with a wonderful social, and will have more to continue building connections.

The Pittsburgh Section held a meeting on 21 September 2017 at the Sports Grille in Cranberry, Pennsylvania. The Section would like to extend its thanks to Nils Hase of Comet Technologies for his excellent presentation on X-ray technology. Hase’s presentation was a good primer on radiographic inspection, showing the latest innovations while drawing comparisons to more traditional techniques.

On 3 October 2017, the San Diego Section hosted its second Section technical meeting of the 2017–2018 year. The meeting was held at the Best Western Seven Seas in San Diego with 15 members and guests in attendance. The section leaders recognized new student members in attendance from National University of Polytechnics.

The speaker for the evening was Matt Roberts. The title of his talk was “A Close-up Look at Computed Radiography: Past, Present, and Future.” This talk brought out interesting questions about basic systems cost, data storage, record retention, and use of software in future data reviews on different software formats/platforms of the future.

To close the evening, San Diego Past Chair Larry G. Olsen presented Roberts with a certificate of appreciation and a speaker’s clock from the San Diego Section. The evening concluded with the regular raffles and a 50/50 cash raffle. Raffle prizes were sponsored by the Section, Phil Fetto from Chemetall, and David R. Waitt from Fujifilm. All in attendance had a good time. 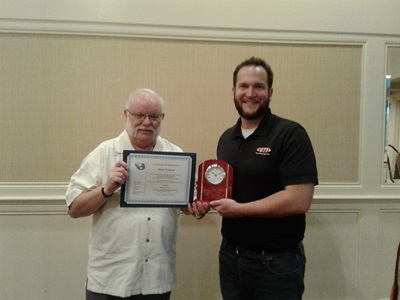 San Diego Past Chair Larry G. Olsen (left) presented a speaker’s clock from the Section to Matt Roberts (right) for his presentation at the Section’s 3 October technical meeting.

The Saudi Arabian Section held its fourth technical dinner meeting for the fiscal year 2017–2018 on 16 October 2017 at the Carlton Al Moaibed Hotel. The meeting was attended by 130 members and nonmembers, including guests from the Bahrain Society of Engineers.

Section Chair Abdullah Al Khalifah inaugurated the meeting with a warm welcome and elaborated on the Section highlights. After the announcements, Al Khalifah invited the guest speaker from Applus Velosi, Jan J. Pols from the Netherlands, to start his presentation. After the presentation, a question-and-answer session was held, and the guest speaker satisfactorily answered technical questions.

As usual, after this session the raffle was held, and lucky winners were awarded door prizes. All the attendees were requested to join the Section for dinner, which was prepared and arranged by the hotel banquet manager at the swimming pool of the hotel. 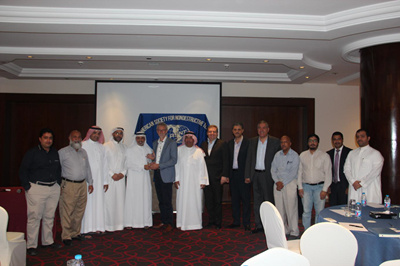 The Saudi Arabian Section Board Chair Fathi Al Qadeeb presented a trophy to guest speaker Jan J.Pols for his presentation at the Section’s 16 October meeting.

The South Texas Section held a meeting on 20 September 2017. The meeting featured a presentation by Brian Edens, the vice president of engineering at OEM, Inc. The presentation was a tour of OEM’s manufacturing facility, highlighting what they do to manufacture (from scratch) a variety of NDE/NDT products, including high-speed EMI pipe inspection systems.

The Southern Africa Section had a very well attended presentation by Jacob Bentsen from Denmark titled “Yxlon Portable X-Ray Tubes” on 3 October 2017 at the School of Applied Non-Destructive Examination in Impala Park, Boksburg. The informative evening was arranged by Herbert Cullum from United Scientific. All present enjoyed the talk and demonstration. 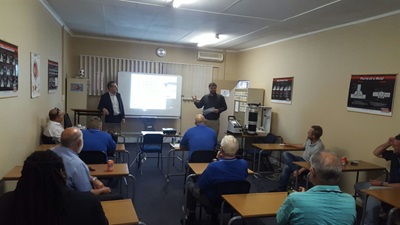 The Miami Valley Section met on 6 September 2017 at Premier Shooting & Training Center to start the 2017–2018 season with some friendly competition. 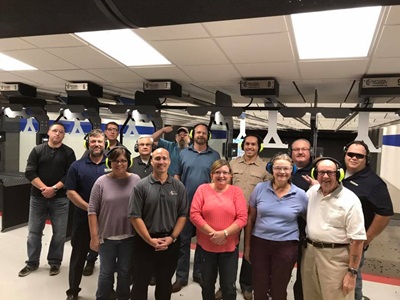